Horizon Zero Dawn's Aloy will Crossover to Genshin Impact: Release Date, How to Get This Character and Her Weapon for Free 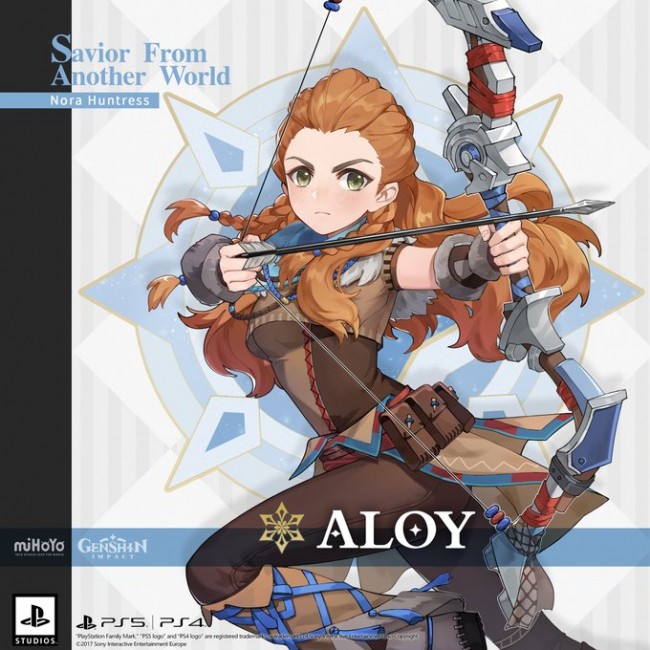 The Zero Dawn has come to the world of Teyvat as Horizon Zero Dawn's Aloy will crossing over the realm of Genshin Impact in a collaboration project between Guerilla Games and miHoYo, the developers of the multiplayer online role-playing game (MMORPG).

Along with the "Predator" bow set, the protagonist of the Horizon series will be playable as the MMORPG's Version 2.1 Update will be rolled out.

Enter Aloy, the "Savior from Another World"

Aloy's crossover from Horizon Zero Dawn to Genshin Impact was largely evident from her character art alone. From the looks of it, she became an anime version of herself, complete with her default get-up that she had in the former.

"Everything I do is in the service of life, not death. That's why I'm here with you."#Aloy
Savior From Another World
Nora Huntress
Cryo
Nora Fortis

Her appearance was "transformed" from the realistic motion captured avatar that Horizon players usually sees to a Genshin-fied character avatar, which according to Kotaku, is "as cute as a button." To complete the said transformation for Genshin Impact, she was given the monicker "Savior from Another World."

But beneath her kawaii transformation remains her signature badass attitude that players of the 2017 action role-playing game known and love. Because of that, according to Polygon, she will be a 5-Star Character.

However, as far as her stats and attacks goes, according to HITC, miHoYo did not announced anything regarding it except a brief description showcasing her backstory. The only thing that is confirmed is that she is a Cryo user and under the Nora Fortis constellation.

Along with her is the "Predator," a bow that is inspired by the weapons in Horizon Zero Dawn. According to HITC, the bow set is a 4-Star weapon and has a 41.3% ATK Boost and a 510 Base ATK stat if it hits Level 90.

The said weapon can also increase a character's Normal and Charged Attack DMG by 10% for six seconds if it deals Cryo DMG to opponents. The said buff's effect can only stack up to two. If the bow is equipped to Aloy, its Attack DMG is increased by 66.

How to Get Aloy, Predator Bow

Both Aloy and the Predator Bow is up for grabs in Genshin Impact for free, which means that both of them might not be included in Character and Weapon banners once Version 2.1 Update rolls out. However, this will come up with a catch.

According to EconoTimes, those reached at least Adventure Rank 20 as well as having to own either a PlayStation 4 or PlayStation 5 are the only one eligible to get both Aloy and the Predator Bow for free. They will receive the two through in-game mail once the Version 2.1 goes live.

Also, these two will be available outside the PlayStation Store, but not until the arrival of Version 2.2 of the game.

Those who are playing Genshin Impact in their PCs and smartphones can also obtain both Aloy and the Predatory Bow, but only if they will wait a little longer until the game's Version 2.3 Update, which will be arriving in a future date.