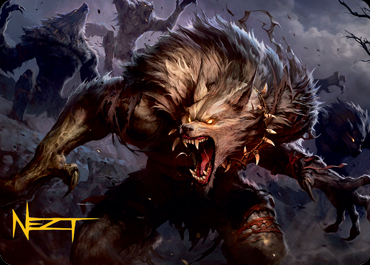 The card art for Village Reavers, one of the Creatures that has a "Nightbound," a new keyword ability that will be debuted in the new "Innistrad: Midnight Hunt" set.
(Photo: Photo from Wizards of the Coast's Magic: The Gathering Webpage)

Magic: The Gathering just released its new set, Innistrad: Midnight Hunt, which will focus around werewolves and vampires, as well as other tropes that players usually see on Horror movies.

The said card set, according to PC Gamer, is a continuation to the Innistrad series, which was first introduced in the card game in 2011.

Aside from the creatures, instants, enchantments, sorceries, and artifacts that will be focused on humans, werewolves, vampires, zombies, and spirits, the cards in the set will feature new keyword abilities that will change how players would play the game, both in physical and in online like Magic: The Gathering Arena.

One of the new keyword abilities that was introduced by Midnight Hunt is Flashback. The said ability, according to Card Game Base, allows players to cast an instant or sorcery, and pay its mana cost, even if it is in the graveyard. Once they have cast it, they must exile, or remove it from the game, afterwards.

This means that players can cast the spell up to two times, either if it was cast on the field then later on the graveyard or when it is discarded from the hand or milled from the library, but later activated it.

Disturb is another new ability from the set, which is similar to flashback, but this is a Creature-only ability. Players can cast a Creature's Disturb ability, and pay its mana cost once it is in the graveyard.

Once cast, the Creature will be "transformed" into Spirits with Flying ability (can attack without blocking), and they will be exiled instead of placing it in the graveyard. Much like the cards that has Flashback, Creatures that have Disturb can also be milled or discarded.

Another mechanic that was introduced is the Night and Day cards. These cards will be played in the game once a card that has a specific condition enters, either a Daybound Permanent, or any cards that specifically state so, like Obsessive Astronomer.

Several cards will be affected by this time shifting. One of which are the Werewolves, Creatures that will transform their appearance, attack, and toughness depending on the time. These cards have a unique mechanic - they can track the "time" by determining if it is Day or Night.

Also, several Daybound permanents will be transformed into their Nightbound side once they enter the field, but there are other cards, such as the Component Collector, who can "change the day" for various benefits.

Coven is another new keyword courtesy of Midnight Hunt, which lets a Creature that has this ability to gain Flying until the end of the turn if a player has three or more Creatures, including itself, with different powers during start of combat on their own turn.

Some the Creatures that has the Coven ability can be triggered, while some of them can be manually activated by the player.

Several spells can create Zombie token that has the Decayed ability, which makes it unblockable, and will be sacrificed at the end of combat. To some, these tokens may not sound too useful, but with a proper strategy and card management, they can be bigger beaters that can dish out larger damage to an opponent.