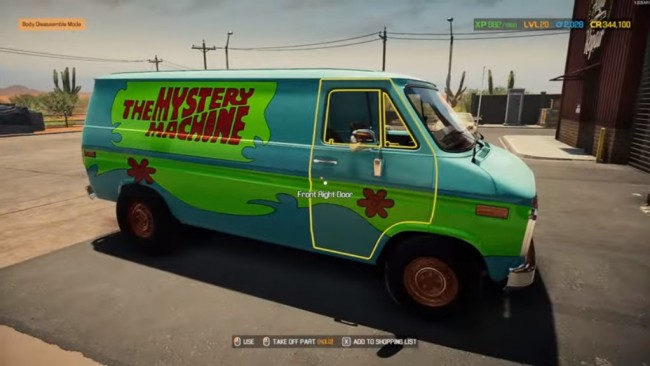 In Car Mechanic Simulator 2021, players are given the opportunity to repair and restore one of the 72 cars that are already available in the game, as well as 8 cars that are in the two downloadable content (DLC) car packs, using more than 4,000 car parts that can be bought using Credits.

These cars, once restored or repaired, can either be sold for additional profit or kept as part of their very own garage collection.

They can also recreate the cars and other four-wheeled vehicles that they usually see in other media such as television programs, movies, and other video games.

Among these vehicles is the Mystery Machine, the van that was used by the Mystery Incorporated, a group of amateur detectives consist Shaggy Rogers and his pet, Scooby-Doo, Fred Jones, Daphne Blake, and Velma Dinkley.

The said van can be usually seen in every iteration of the Scooby-Doo animated television series, ever since its first appearance in "Scooby-Doo, Where are You?" in 1969.

There are many speculations on what might be the model of the said van, but for the sake of the game, the van that will be using is the GMC Bandura, or the Bolt Cargo in the game.

How to Convert a GMC Bandura into "The Mystery Machine"

In order to start the said restoration and customization, according to a YouTube video made by CrypticFox, players must first purchase the said van. The Bolt Cargo can be usually found, and sols, in the Junkyard, the Barn, or in Car Auctions.

Once they have purchased the said van, they can carwash it to remove the dirt, then they will transport it to the car lift in their garage.

From there, they will disassemble the van, including its doors, windshield, engine, interior, wheels, and suspension, until what is left is the body frame. Afterwards, they will repair said body frame by clicking the wielding machine, then select Use Equipment.

Once they repaired the frame, they may now proceed in repairing the parts that still can be used in the restoration. Parts that have yellow numbering right beside them during either the Examination Mode or Parts Disassembling Mode mean that they can still be repaired. Those who are impossible to repair can be sold for additional Credit or Scrap.

Using the Repair Table, they can place the said part, and hit the green lines to repair it. They will need to repeat this until the part is 100%, or successfully repaired.

Once they got the parts repaired, they may start re-assembling the engine. The Bolt Cargo housed a V8 engine. In order to build it, they must have the engine block, the pistons with its rings, the crankshaft, the oil and fuel filters, the carburetor, the fuel pump, the rod caps, the crankshaft bearing caps, and the oil pan.

Once they finished building the engine, they will mount it inside the engine using the Engine Pulley. Afterwards, they will re-assemble the rest of the van, including the wheels and suspension, the gearbox and the starter, the electronics, the radiator, the interior, the doors, and the windshield.

To make it more accurate, players need to paint their rims orange first before installing in the wheels.

Once they replaced its oil, windshield wiper fluid, power steering fluid, brake fluid, and coolant, as well as adjusted its lights and wheels, and tuned the gears in its gearbox, they can now custom paint the said van, and transform it into The Mystery Machine.

To do this, they must first download the said livery via the Steam Workshop. Once it is downloaded, they may check the Paint Shop to see if it is in the Liveries. If it is there, they can now use said livery. They may now test drive their very own Mystery Machine.