'Destiny 2' Xur Location Guide: Where is the Merchant Located, What Exotics is He Selling 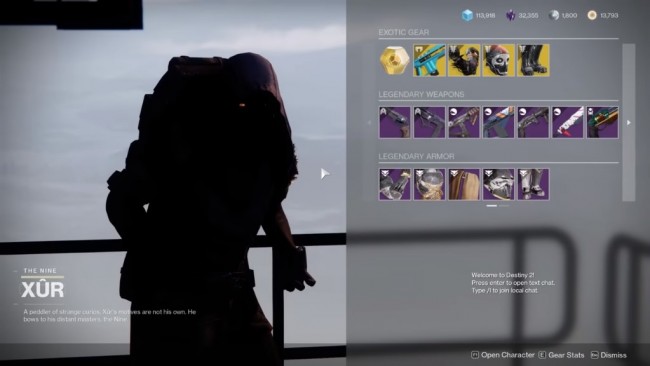 Destiny 2 players are on a treat as the first-person shooting game brings back Xur and his merchandise that they could not resist to buy. The said merchant will bring in Exotic weapons and armor items that they can buy using Legendary Shards.

This unique currency, according to Eurogamer, can be retrieved by either dismantling any Legendary and Exotic gear and Mods, through drops from decrypting Faction engrams, such as those from the Crucible, the European Dead Zone, and the Arcology, or by completing a Nightfall activity.

Where is Xur in Destiny 2

In order to access the vendor and its goods, players must find him first throughout the game. The Agent of the Nine, according to WhereIsXur.com, usually appears on weekends between 12:00 PM EST on Fridays to 12:00 PM EST on Tuesdays.

The location where he is in usually changes every week, but he usually appears in a public sector in any of Destiny 2's four worlds - the aforementioned European Dead Zone, the Titan, the IO, and either the Nessus or in the Tower.

READ ALSO: 'Destiny 2' Season of the Lost Seasonal Challenges Week 4 Guide: How to Clear Them ALL

For this weekend, players can look for the merchant in the Tower. According to Express, Xur is located at the said area's hangar in the top left corner, hanging out by Dead Orbit,

What is Xur Selling

Once they saw him in the aforementioned area, Xur will offer the players the merchandise that he has for the weekend.

According to Gosunoob.com, the merchant is selling the Shards of Galanor, a pair of Exotic Hunter Gauntlets that costs 23 Legendary Shards, and gives the wearer Sharp Edges, replenishing the Super energy used for every hits and kills it land using Blade Barrage.

According to Gamespot, the said gauntlets can still replenish the Supers used in several situations despite the limit Bungie set on how much of the said energy a player could get back.

He is also selling the One-Eyed Titan, an Exotic Titan Helmet that costs 23 Legendary Shards, and provides Vengeance, a buff that can marks enemies that damaged the wearer, and if it kills the marked enemy, it will gain an Overshield buff.

This helmet, and its perk, is useful for those who wanting to survive the player-versus-player (PvP) situations, especially in surviving multiple duels in the said game mode.

Another merchandise that Xur is offering is the Geomag Stabilizers, a pair of Exotic Warlock Leg Armors that costs 23 Legendary Shards, and can provide the Close Enough perk, which can extend the Chaos Reach Super once the wearer deals damage.

Finally, he is selling the Merciless Exotic Fusion Rifle, which costs 29 Legendary Shards. This fusion rifle, who can hold up to 8 Magazines and a Charge Time of 1040, can rapidly blast away any enemies after its Charge Time drops following a hit.

It can also gain a damage boost once the wielder of the said fusion rifle lands a kill. This means that players who are wielding Merciless can kill smaller enemies first to stack up the said boost in order to dish out more damage to larger ones.