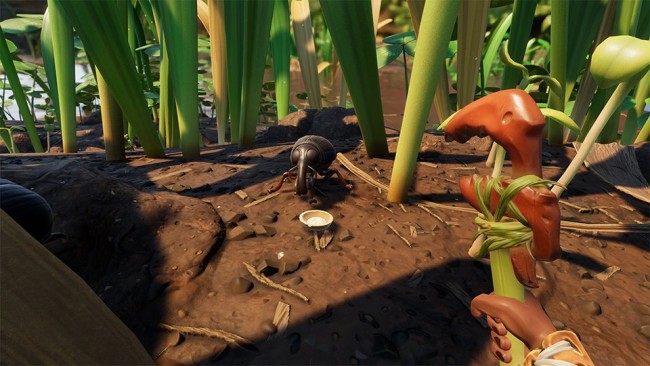 It is time to get hot and hazy in the backyard as Grounded received its latest "Hot and Hazy" update, bringing in new additions to the survival game.

The said additions, according to Sirus Gaming, includes new areas that players will explore, new systems that they will try, and neighbors that they will encounter, as well as new threats from the Haze area, especially those that are lurking in the shadows.

It's Getting Hot and Hazy

In the Hot and Hazy update, according to Update Crazy, there four new biomes that will be added in Grounded.

~Hot and Hazy Available NOW~
Survive the perils of the sizzling hot Sandbox 🥵 and defend against the poisonous fungi 🍄 of the revamped Haze in Grounded's biggest update yet. Discover new "neighbors" 🐜 , craft new armor 💪 , and GET YOKED 🦷 with vitamin Milk Molars and more! pic.twitter.com/PRsbYSW8Ik

In the Crab Sandbox, players will dig for buried treasure while finding ways to survive the heat, or wait until the night comes in order to venture in the area easier, while in the Black Ant Hill, they can uncover new craftable weapons and armor, while a new mini-boss is waiting for them.

The Trash Heap and the Picnic Table, on the other hand, lets its players look for food and other items in either scraps or leftovers that are scattered in those said areas, which they can use in their journeys.

Aside from the new areas, the Hot and Hazy update also revamped the Haze, adding exploding fungi and a deadly fog of weedkiller, as well as enemies, that players need to avoid.

The said update will bring eight new bugs that they will encounter as they progress in the game. Thanks to the update, three new Infected bugs, including Infected Ladybugs, Infected Larvae, and Infected Gnats, can now be find in the game. Once defeated, they can drop fungal growths as an additional loot.

Aside from the said Infected bugs, five additional bugs will be included, including the Black Worker Ants and Black Soldier Ants, which can be seen in the new biomes, including the Black Ant Hill. Sickly Roly Polys will also appear in Grounded, as well as Antlions and Meaty Gnats.

New Equipment will also be added in the game, including armor and weapon sets that can be crafter after defeating the Antlions, Sickly Roly Polys, and Black Ants. Each of these gave permanent buffs, as well as bonuses once a set is completed.

These new weapons and armors, as well as old ones, can be upgraded in the brand-new Smithing Station by using various upgrade globs, like the Quartzite Shards, Mint Globs, Spicy Globs, and Salty Globs.

A new Smoothie Base was also added in the form of the Gum Nugget. Now players can create Sticky Smoothies, that can provide a regeneration buff on top of the default initial heal, which can last two more times than the normal Smoothies.

Finally, the Milk Molars will be included in the game, which, according to Destructoid, can increase a player's Health, Stamina, Hunger, Thirst, and Equipped Mutation Slots, in exchange for 1 Milk Morsel.

Its Mega variant can be shared with the party, which increases max stack sizes to items like Food, Resources, and Ammo.

TAG Grounded
© 2020 Game & Guide All rights reserved. Do not reproduce without permission.