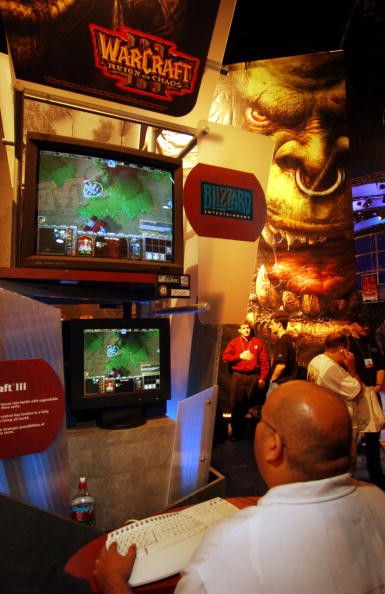 405736 04: A man plays "Warcraft- Reign of Chaos" by Blizzard Entertainment, on the first day of E3, the Electronic Entertainment Expo, May 22, 2002 at the Los Angeles Convention Center in Los Angeles, CA . E3, now in its eighth year, is billed as the world's largest trade event exclusively dedicated to interactive entertainment, educational software and related products. (Photo by David McNew/Getty Images)

Blizzard Entertainment is a popular American video game developer as well as publisher that is based in Irvine, California. It was founded in the year 1991 under the popular name of Silicon Synapse. The company was known for creating the best studio games right from the beginning of development within their software in the year 1993 with Rock N Rock Racing along with Lost Vikings. The company became Chaos Studios first before it was Blizzard Entertainment. It was a holder of several games & here's a look at the greatest ones in 2021.

If you find these games interesting and you want your friends to join you in a blizzard gift card would be a good idea as a gift.

Overwatch is an exciting game on Blizzard Entertainment where the team of players have different roles, such as tanks, support, offense & defense to form a single team within a different mode of the game. This also includes escort, hybrid or assault. Overwatch also combines traditional FPS games along with MOBA-esque characters that have unique weapons & abilities. You will be able to bash, shoot & use different weapons while playing. With every character displaying a new playstyle, you should be able to have a lot of fun! Along with this, Overwatch won't just reward accurate shooting but also great decision making so that you can make good use of your abilities, create gameplay etc.

World Of Warcraft by Blizzard Entertainment is one of the most popular games that you can always enjoy. Since the release of the game in 2004, over 100 million accounts were created & Blizzard has managed to gross approximately a billion dollars every year. Similar to other popular games, this one allows you to create avatars, explore open game worlds, explore landscapes, fight monsters, complete quests and more. The game also focuses on character progression where players get experience points in order to boost their character & become more powerful.

Blackthorne is one of those that will always be remembered as legendary. It is one of those excellent games that spreads like a virus. People like it & seem to develop an addition for it quite easily. It is tough, macho, charismatic & curated in a fantasy world that will take you rightfully through. Not just that, it has many levels, contains different enemies along with new weapons as well as scenery. This ensures that the game does not become boring & monotonous. The graphics & sound are also quite amusing & above average.

Heroes Of The Storm

Heroes of the storm goes around the whole 5 versus 5 matches that operate through online gaming through Battle.net within the duration of 20 minutes. The ultimate choice is to maintain the structure of the team, before the enemy does the same thing. In order to reach the core, the first line of defensive structures known as keeps & forts need to be destroyed. Players who use the assistance of mercenary camps, bosses & a group of controlled units. Minions often spawn throughout the game in groups & march along the lanes towards the base. Over 15 battlegrounds are available for play & they are also easy to secure.