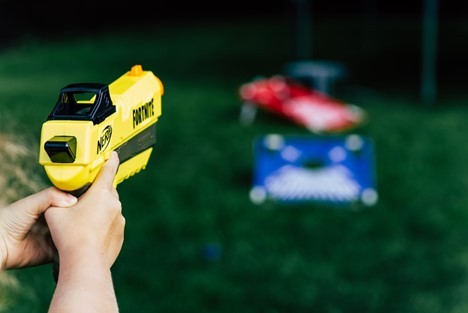 Kids in Honolulu have a variety of ways to keep themselves busy, but did you know that Nerf Gun Parties in Honolulu are becoming one of the biggest trends among boys and girls? It's not just popular in Honolulu, but also in other cities within Honolulu County including Ewa Beach, Pearl City, Laie, and Aiea.

What is a Nerf Gun Party?

A Nerf Gun Party goes by many names including Nerf War Party, Nerf Party, and Nerf Wars. It's held often in an outdoor location due to needing a location the size of at least one football field. There are Nerf Guns involved as well as paintball barriers and other inflatable bunkers, Nerf Darts, chalk bombs, and smoke bombs are also used.

In a Nerf Party, the ringlinger of the event and host is known as the Nerf Coach. They are employed by the company that provides Nerf Gun Parties and are an integral part of the event. The Nerf Coach will show up around 30 minutes before the party starts and set up the entire event at the location you've chosen.

They will stay to guide the variety of games found in Nerf Wars, and provide safety demonstrations before the games begin. Even better is that the Nerf Coach is responsible for cleaning up at the end of the day so you can enjoy the party without the hassle.

What Age Groups Can Participate in Nerf War Parties?

Children ages 5 and up can participate in the Nerf Wars although the more impactful Nerf Guns are reserved for children ages 9 and above. Teenagers and adults can also join in on the fun so it's perfect for the entire family. One reason why it's popular among kids in Honolulu is because it's outdoors and it's something both boys and girls enjoy since their friends and family are involved in the games.

It Offers Multiple Games Built Inside One Main Event

Kids in Honolulu love Nerf War Parties because there is so much variety in the games. It's not just one Nerf Gun and a few Nerf Darts where they just shoot at each other. Games and mini-games are a part of the entertainment. Games include Team Deathmatch, Zombies vs. Humans, Nerf War, Medic, Capture the Flag, Retrieve the Diamond, Last Man Standing, and Hit Squad.

There are mini-games within the games so it provides hours of entertainment and the variety of games keeps the kids interested and just as competitive as the first game played in Nerf Wars. The event is usually two-hours long so there are quite a few games that can be played in that amount of time. Since it's only a two-hour event, kids can enjoy it without feeling burned out like they might if it was an all-day activity.

The multiple games aren't all the same in terms of skills needed, so kids in Honolulu love Nerf Gun Parties because each game requires certain skills to win. One kid might be really great at one game and win, but another kid is likely to win the next game because it's more suited to their skills or physical abilities. All of the games require some level of quick reflexes, so it's also a good way to improve hand-eye coordination.

The competitive nature of the games makes it perfect for kids and the older the kids are the  more likely they are to be competitive with one another. It could be that you have a big family so a bunch of brothers or sisters are competing against each other or simply a group of teenagers that think they are better than their friends.

Kids are Tired of Being Indoors

Kids in Honolulu much like everywhere else in the world are just tired of being indoors, with COVID hindering their ability to hang with their friends. Nerf Parties are held outdoors which means it's safe during these COVID times and it's ideal for kids that have missed seeing their friends and hanging out with them.

The weather in Honolulu is also generally really nice so having a party outdoors and being able to enjoy the sun and the warmth is very pleasant for kids of all ages. Nerf Wars also require a level of running around and that's something kids really find fun regardless of age. The more they run around getting physical activity, the better they will feel and the more likely they are to sleep at night.