'Solasta: Crown of the Magister' Beginner's Guide: How to Create your own Fantasy Adventure 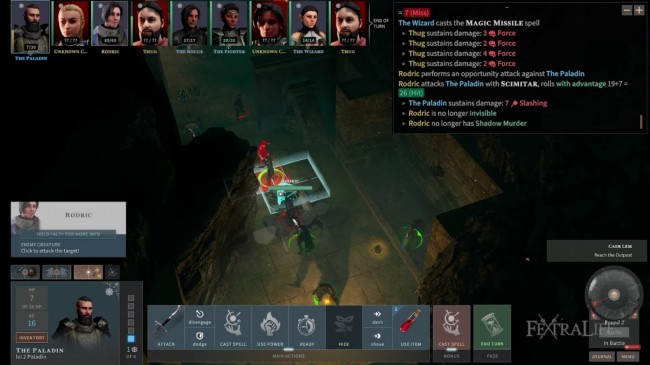 Thje battle interface for the Dungeons and Dragons-inspired RPG game, "Solasta: Crown of the Magister," which shows elements that will make feel like you are playing the mentioned tabletop game.
(Photo: Screenshot from Fextralife's "Solasta Crown of the Magister Review Impressions: A Faithful D&D 5E Adaptation")

Tactical Adventures, the developer of the game, even said in an article from PCInvasion.com that it was a "faithful adaptation to the Dungeons and Dragons' ruleset."

But before you will experience this wonderful fantasy RPG, you must need to learn the basics on how to start your journey within the world of might and magic.

Hey. Hey you. Solasta leaves Early Access tomorrow, and to celebrate we're throwing a -20% discount into the mix... starting now!⚔️

1. Create your own party

In "Solasta: Crown of the Magister," you will have the ability to create a party of four characters, each based on your preferred abilities, strengths, and personality types. You can either choose between premade characters or you can create your own characters for the party. There are 5 races playable in the game - Human, Half-elf, Elf, Dwarf and Halfling.

After picking your character's race, you will need to determine its class. The game has 6 classes to choose from - Cleric, Fighter, Paladin, Ranger, Rogue or Wizard. Each classes have its advantages and disadvantages, with unique spells, skills, and statistic boosts. Take note that each of your characters has its own stats or attributes such as its strengths, dexterity, constitution and intelligence. The game itself even suggests which attribute are the best ones for a specific class.

For every attribute, there are points that you can assign manually or use dice rolls to determine each attribute. You can even max out an entire stat line. For more helpful tips in character making, you can visit Steamlist for Gamers' Beginner's Guide.

Once you create your own party, you can now enter the world of Solasta.

The story of "Solasta: Crown of the Magister" centers around the threat of the Sorr-Akkath, a race of vicious, lizard-like humanoids and it is up to you and your party to stop them. As you prepare for this imminent threat, you need to make yourself battle-ready by exploring dungeons and engage in combat.

According to a guide made by PCInvasion.com, there are dungeons not well-lit like caves or close rooms. You need to prepare a torch or candle to lit several places within the dungeon. You can also prepare helpful spells such as Light to illuminate something or Daylight, a spell that has a large area of effect, to give light in a specific area of a dungeon. You can also use the Darkvision trait form the elves and half-elves that allows them to see clearly in the dark.

There are other dungeons where you can spot traps that you can disarm or destroy using long-ranged weapons or abilities.

As you explore the dungeons, if you want to be on a safe side, you can try stealth to avoid a sudden engagement. You can send in your Roque or a Ranger to scout the area. When you are clear, you can look for an ideal position like behind a pillar or a tower that can provide a vantage point. Once you are ready, you can shoot an unaware enemy to initiate a surprise attack. This will make the enemy squad lose a turn during combat.

Combat in "Solasta: Crown of the Magister" is turn-based, which means you need to think wisely of a strategy or move during the battle, including attacking, defending, and casting spells. And since the game is inspired by Dungeons and Dragons, you will rely on your every attack (and every defence) to every dice roll.

These dice rolls will depend on its relative attribute. The higher the attribute, the greater the result generated by the dice roll. For example, a higher stat for the Wisdom or WIS attribute can generate a chance for a particular spell to have a great damage.

In case of a teammate that was knocked down, or having 0 Health Points, you need to cast the "Spare the Dying" ability to stabilize them. These characters will have the ability to perform a "dying save," which should they fail three times, they will be considered as "dead."

To avoid this, you need to prepare a revival spell such as "Revivify" or a revival scroll.

In terms of spells, they are categorized into two - "Concentration" and "Ritual." Concentration spells, according to the PCInvasion.com, are those character-specified spells, but with two conditions: (1) you can't take a hugely damaging hit that will break concentration, and (2) you may not cast another Concentration-type spells while the previous one is still active, unless you cancel it.

These spells can either give a long lasting buff or an additional effect on the environment. It can also affect any summoned creature.

On the other hand, Ritual spells can be initiated once you click a small book icon within the game. Once you click the ritual tab on your action bar, you can now cast spells feely without concerning that you are expending a spell slot.

You can visit the PCInvasion.com's Guide for the game if you need further explanation for its other combat mechanics.

After every battle, you will have the chance to loot items, especially those that are useful for your characters. With these loots, you can create, or craft, items that will you on your journey. In "Solasta: Crown of the Magister," you can obtain scrolls or booklets that have crafting recipes in it.

You can start crafting by opening the character screen and select the crafting tab. In the PCInvasion.com's guide, there are five essential crafting tools that you need in the game - Herbalism Kit, which allows you to craft poisons. Smith's Tools, which you can create arrows and bolts. Manacalon Rosary, which used in making weapons and armor pieces. Poisoner's Kit, which you can create toxic vials and arrows coated in poison. And Scroll Kit, which you create various scrolls that can aide you during exploration and in combat.

Along with these kits, there are components that needed to make a specific item. For example, weapons and armor pieces need primed versions of several items within the game. These items can be acquired from item drops and chests.

Crafting within the game takes hours, so you can have that opportunity to either take rest or travel to an another location.

You can visit the PCInvasion.com's Guide for the game if you need further explanation regarding other merchant NPCs that are available within the game. Just make sure that you need to manage your inventory spaces by using chests in your main town or buy better backpacks to avoid carry weight issues.

With these basics, you are now prepared to craft your own fantasy story within Solasta: Crown of the Magister. The game will be available tomorrow on Steam for download.