Dead by Deadlight-Resident Evil Crossover Guide: How to Play as Jill, Leon, and Nemesis 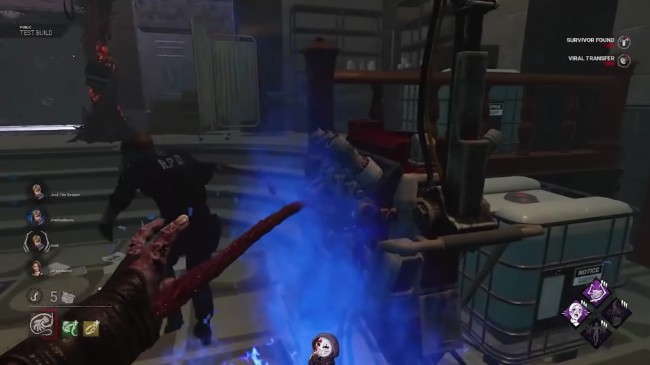 In celebration for its 25th year anniversary, the characters of Resident Evil will crossover to the realm of Dead by Daylight as players will traverse the asymmetric survival horror game as Leon Kennedy and Jill Valentine, two of the faces of the Resident Evil franchise, or as the deadly Umbrella Corporation's Bio Organic Weapon, Nemesis.

These three characters, along with the new Racoon City Police Station map, are the newest addition to Dead by Daylight after the game received the Patch 5.0.0 Update.

In the trailer reveal of the said crossover, the event will be launched this coming June 15th.

From the ravaged streets of Raccoon City to the black Fog of the Entity’s Realm. The hunt is on.
Learn more: https://t.co/87YorKrRxh​#ResidentEvil #Capcom pic.twitter.com/vcTmt1Vipx

While you are waiting for its release, here are some tips to learn more how to play either the two Resident Evil protagonists as "Survivors" or Nemesis as the "Killer."

Debuted in the first Resident Evil game in 1996 that spawned the term "survival horror," Jill Valentine will maneuver her way out of the Killer's grasp while sabotaging its plans thru indirect means with the help of her perks.

Her "Counterforce" revolves around the routine cleansing of several totems that are scattered around the map. With this perk, she can cleanse totems faster than any Survivor and gains an extra speed boost with every totem cleansed.

This perk also reveals the location of the farthest totem from her position once cleansing of an another totem was finished.

"Resurgence" is a life-saving perk where she gains an automatic progression towards healing herself every time she is freed from the hook, whether by her own or someone helped her. This perk will reduce the time it took for herself to be healed.

"Blast Mine" is a great perk from Valentine to create nuisance for the Killer. With this perk, she will install Blast Mines within the perimeter of the generator while repairing it to 66% of its completion. When a Killer tries to break it, it will automatically detonate, causing to temporarily blind and stun anyone in its radius.

While Jill Valentine focused on sabotage, Leon Kennedy focused more on pinning down the Killer up close. A consistent Resident Evil protagonist since 1998's Resident Evil 2, Kennedy's perks involves on survival and distraction.

His "Bite the Bullet" perk increases his chances of survival when healing. This enables him to be in silence while healing himself or when a skill check suddenly fails. This is perfect for those quick survival saves even when the Killer is less than a foot away from you.

"Flashbang," like Valentine's "Blast Mine," is a perk that can stall the Killer from its tracks, except that this is either up close or ranged. The perk is active when your progress in repairing a generator is in 50%. To activate this, you must enter first a locker and from there, you can craft a flash grenade, which takes a space in your held item slot.

"Rookie Spirit," his third perk, gives Kennedy the ability to see auras of any regressing generators so as long as he completed either three "good" or three "great" repair skill checks.

These perks can also be unlocked for other survivors for them to use in their custom perks line-up.

For more information regarding Valentine's perks as well as Kennedy's, you may check the guides from Attack of the Fanboy and HITC.com.

The Dead by Deadlight-Resident Evil crossover offers you the opportunity to play Nemesis as the Killer. First debuted on Resident Evil 3 in 1999, the behemoth of Umbrella Corporation brings forth the infamous T-Virus with its Special Attack.

Called the "Tentacle Strike," this attack involves Nemesis charging up his ranged attacks with his tentacles which can be released on the area in of you or over small barriers.

Once hit by its tentacles, the Survivors will be infected with the T-Virus, causing them to be Contaminated while Nemesis gains "mutation" for its "Tentacle Strike," increasing its level, as well as gaining new functions to the attack.

Take note that if the tentacles attack any Contaminated Survivor, it will just deal normal damage instead.

Despite of its large stature, Nemesis became a pursuer of every Resident Evil protagonist. And within the realms of Dead by Daylight, he will to the same to the unlucky Survivors with his perk, "Lethal Pursuer."

With this perk, you can see the Aura of every survivor for a 5/6/7 seconds, depending on the level at the start of the Trial.

"Hysteria" is a perk that will make you terrorize the survivors as you brutalize one of them. Every time you put a healthy survivor into an Injured state using a basic attack, all of injured survivors will suffer from the Oblivious status effect for 20/25/30 seconds, depending on the level. The skills has a 60-second cooldown.

"Eruption" will make you stall every Survivor's progress to repair the generators within the map. This perk activates after kicking a generator. Once kicked, its Aura will be highlighted in yellow. When you put any Survivor into a Dying state with a basic attack, every generator affected will explode, causing their progress to regress by 6% and their Auras to disappear.

Any Survivor who tries to repair a Generator when it explodes will be affected by the Incapacitated status effect for 10/12/14 seconds, depending on the level. It has a 90-second cooldown.

Lastly, Nemesis bring in the Zombies in the fray as special enemies. These Zombies can attack a Survivor, causing them to be Contaminated. If Zombies attack a Contaminated Survivor, it will deal damage instead.

Zombies can also be used as a sacrificial pawn for the Nemesis as he can destroy them to raise his Mutation Rate for his "Tentacle Strike." Survivors can attack the Zombies with pallets as well. Those destroyed zombies can be respawned after 12 seconds.

Another tip while playing as Nemesis is the fact that four crates will spawn on the map every time Nemesis is the Killer. These crates contain a cure for the virus, which can be used one-time during the game. When a Survivor uses the cure, a visible and audio cue will show up for Nemesis, causing it to learn the whereabouts of the said Survivor.

In order to avoid this, Survivors must have Leon Kennedy's "Bite the Bullet" perk in their lineup.

For more information regarding Nemesis' attacks, perks, and special abilities, you can visit the guides made by Attack of the Fanboy, HITC.com, and DBLTAP.com.

Dead by Daylight is available on Playstation, Xbox, Nintendo Switch, and PC.

TAG Dead By Daylight, Resident Evil
© 2020 Game & Guide All rights reserved. Do not reproduce without permission.