'Minecraft' 1.17 Update: What Features Will 'Caves and Cliffs: Part 1' Give to its Players, When is its Release Date 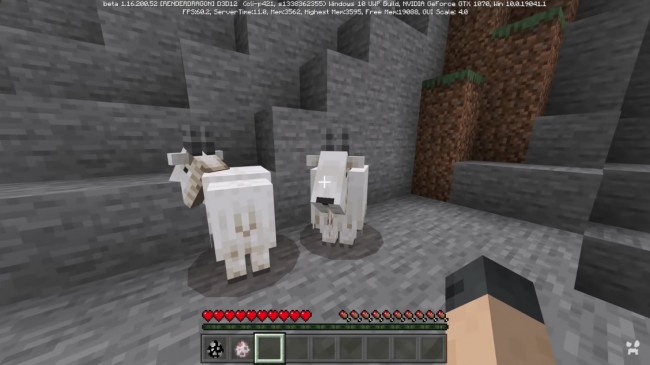 Get your Crystal Pickaxes and Meat ready as Minecraft releases their newest Version 1.17, which included their "Caves and Cliffs: Part 1" expansion and other features that will make the open-world builder game more exciting.

In a Twitter post made by Mojang, the game's developers, the update itself will be released both in its Java Edition and the Bedrock Edition today, June 8th, at around 10:00 AM ET (3:00 PM BST).

This update, according to Attack of the Fanboy, is one of the game's 2-part expansion packs and focused on the new mobs, items and blocks that players will encounter. On the other hand, new cave types and world generation features will be released in the second part of the expansion.

Have your axolotl-scooping buckets at the ready: Caves & Cliffs: Part I releases tomorrow! pic.twitter.com/cuCEEMyrsR

In "Caves and Cliffs: Part 1," players will encounter goats, axolotls, and glow squids as the update's newest mobs. Mojang jokingly said in their article regarding the update that players "will not be safe" from the dreaded headbutting goats, which players can milk like the cows in the game.

Axolotls are located in the underwater parts of normal caves, and can be scooped in a bucket. Glow squids spawn in the dark bottom of the ocean and can drop glow ink sacs, which they can use to craft new glow item frames.

The update will also give players a new set of blocks, which, according to Attack of the Fanboy, includes minerals and stones like Copper Ore, which they can use to craft new items like spyglasses and lightning rods, and Amethyst Geodes, which they can use for crafting telescopes.

Blocks that are used to build the environment such as Dripstone and Pointed Dripstone, the Glow Lichen, Powdered Snow, Deepslate, Moss, Glow Berries, Azalea, and Dripleaf Plant are also included.

Aside from the new items and drops the game offers, the 1.17 Update also provided additional advancements and changes to Minecraft ranging from its cosmetics and gameplay to bug fixes.

According to RealSport101.com, advancements for the "Caves and Cliffs: Part 1" includes tasks regarding the new items such as waxing a Copper block, floating a boat with a goat, catching an axolotl, and looking for something through a spyglass.

Changes that will be implemented in the game includes places for spawning every mob, functionality and textures of every candles including its crafting, and glowing texts.

The 1.17 Updates also fixed several bugs including bugs that causes someone to fake its death everytime its max health was reduced, bugs that will create a lag spike while loading a player's head textures, bugs that creates background jitters during credits, bugs that will make item statistic sorting not functioning, and among others.

Where is the Part 2?

Mojang will might provide additional details, including 1.18's patch notes, once 1.17 is released and its release date gets closer.

"Caves and Cliffs: Part 2" will include additional updates for the game including revamps for its caves and mountains as well as new mobs that will be spawned in the future once 1.18 is released.

Minecraft, including the "Caves and Cliffs: Part 1" expansion update, is available now on PC, PlayStation 4, Xbox One, Nintendo Switch, and mobile devices.