Fortnite 'Foreshadowing' Quest Guide: Where to Locate the TV Sets Within the Game 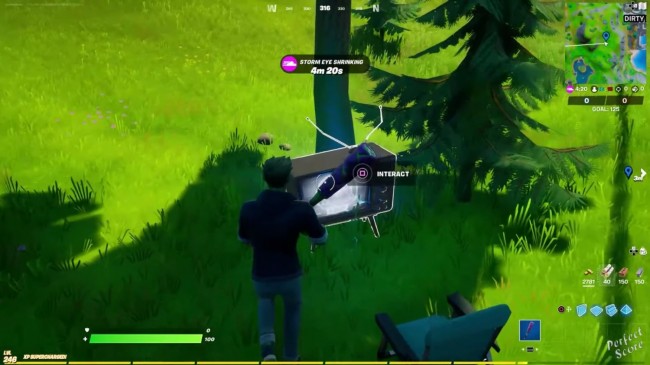 In the 5th and final "Foreshadowing" quest, players must look for TV sets within the map and destroy them
(Photo: Screenshot from Perfect Score's "Destroy Spooky TV Sets (5) All Locations - Fortnite Foreshadowing Quests")

With its Season 6 coming to its end, Fortnite is now preparing to kickstart its Season 7. And to end its current season with a bang, the first person shooting game had quests for its players that will "foreshadow" what the next season brings.

Titled the "Foreshadowing" Quests, players will need to complete location-based quests, from locating damaged telescopes to shut-down helicopters to crop circles within the game. The last one will be locating television sets within the island.

The quest itself will act as a countdown for the start of Season 7, which will be starting today, June 8th. According to an article by ESportsTalk.com, the game gave a lot of teasers regarding what theme would be, including several "cases" where players were slowly disappearing because they are abducted by aliens.

They came without warning, their intentions were unclear. But what’s clear now is that a war has come to the Island.

The 5th "Foreshadowing" Quest will be centered on locating and destroying 5 television sets, all of which are pinpointed in every specific location of the island.

In a quest guide provided by Sportskeeda.com, the first TV set is located off the coast of the Craggly Cliffs, which is in the true north of the map. You can simply break the TV set in the middle there. After that, you need to head southwest for the next location.

For the second TV set, head southwest from the Craggly Cliffs until you arrive at the Fort Crumpet, where you found the TV set on its western most shore past the said location. After destroying the TV set there, head southeast for the third location.

Located in the northeast of Holly Hedges, the third TV set can be found in the small woods nearby. Destroy it then head towards the Slurpy Swamp for the fourth location.

The fourth TV set is located in front of a large tree south of the Slurpy Swamp. Again, destroy the TV said, then head far east of the island to the Dirty Docks. You can locate the fifth TV set in between the phone towers.

For the sixth TV set, you must go to the west of the Lazy Lake, then after destroying the set, you must go at the bottom of the map, below Catty Corner, for the final TV set. It is located at a campsite on the side of the mountain.

Tips for the Quest

It will be difficult for you to accomplish the said quest while doing a casual match within Fortnite. In order to fulfill the quest as fast as possible, ESportsTalk.com had a suggestion - try doing the quest itself in Team Rumble mode as it will give you more time and respawns to accomplish it.

Another tip from Sportskeeda.com is to know if the storm circle is kind enough for you to give you the closest location for the TV set. Also, you need to plan your landings as said landings for the TV locations will be difficult during the match.

READ MORE: Latest Fortnite Trailer: Meet The Husk, The Undead With The Human Face For A Hoodie [VIDEO]

TAG fortnite
© 2020 Game & Guide All rights reserved. Do not reproduce without permission.