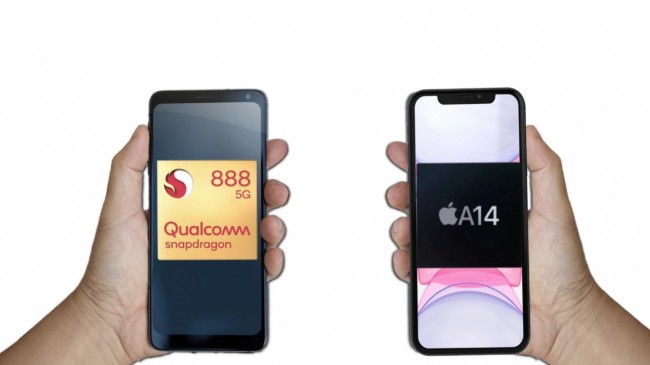 On the left corner, the Apple A14 Bionic. On the right corner, the Qualcomm Snapdragon 888. Both known as two of the flagship "System-on-a-Chip" (SoCs) for next-gen smartphone. They are on par with other SoCs like the Samsung's Exynos 2100 and Huawei's Kirin 900.

With the race for the next-gen smartphones are coming, along with the continuing shortage of the semiconductors around the world, manufacturers of these SoCs are still looking for ways and techniques to enable smaller transistor sizes. An example is the 5nm EUV process used by these two.

According to AndroidAuthority.com, manufacturing on the 5nm EUV process will result in greater density as well as improved energy efficiency as well providing them the tangible improvements to chip capabilities, performance, and battery life.

Snapdragon 888 vs A14 Bionic, Which SoC will be the King in 2021, Specifications, Features and Benchmark Compared

But despite of this similarity, these two SoCs have differences in terms of performance that will apply on their respective smartphones.

READ ALSO: Microsoft To Partner With Qualcomm To In Order To Bring Windows Software to Devices Under ARM Processors

In terms of their central processing units (CPUs), both the Qualcomm Snapdragon 888 and the Apple A14 Bionic had their differences as well as similarities.

In terms of the number of processor cores, the Snapdragon has 8 Cores while the A14 Bionic only has 6.

Almost both them have the capability to encode and decode videos up to the Codec h264, but the A14 Bionic can decode AV1 while the Snapdragon doesn't.

Despite both having the LPDDR4X-4266 RAM installed in them, the Snapdragon has the LPDDR5-3200 RAM, which clocks up the data speed up to 6,400 Mb/s as well as reducing the power consumption by 30%.

Snapdragon has more Memory channels than the A14 Bionic, but the latter has a 16GB Maximum Memory allowed.

When it comes to performance in several aspects, the A14 Bionic wins in terms of CPU and Gaming Performance, but the Snapdragon 888 has more efficiency of battery consumption.

According to a test in the GeekBench 5 by NanoReview.net, despite having a faster image compression with 176.7 Mpixels/s, the Snapdragon 888 was beaten in other aspects by the A14 Bionic, especially in terms of Face and Speech recognition, Camera Shooting, and encoding a web page with HTML 5.

However, in a different benchmark test by AnTuTu 8, NanoReview said that the Snapdragon 888 is more advantageous in terms of CPU, GPU, Memory, and UX performance in different scenarios than the A14 Bionic.

All in all, both the SoCs have key differences with each other. For the Qualcomm Snapdragon 888, it has 2 more cores that can speedup data processing and can support a 20% higher memory bandwith. On the other hand, the Apple a14 Bionic has 4 MG larger L3 cache size, and a 5% higher CPU clock speed.

TAG Qualcomm Snapdragon 888, Apple A14 Bionic
© 2020 Game & Guide All rights reserved. Do not reproduce without permission.