'League of Legends' Patch 11.13 Update: What Champion Nerfs and Buffs Players Would See 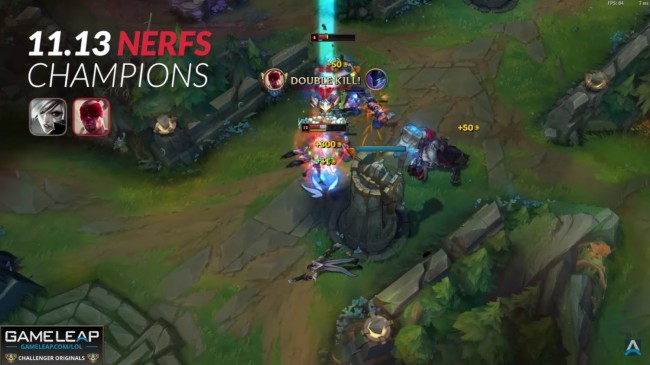 This is after Riot, the game's developers, implemented the Patch 11.12 Update, which, according to Dot ESports, provided only a small change in terms of balance between Champions.

This is a very big systems patch including the mobility reduction across a lot of systems and the additions of split push items for fighters and tanks. pic.twitter.com/hhC54Npi2B

READ ALSO: LoL:Wild Rift's Patch 2.3 Update Guide: How to Unlock Irelia and Riven for Free in the 'Broken Blades' Event

According to Dot Esports, Rumble and Lee Sin will might receive nerfs after their domination in the solo queue as well as professional play for the past game patches.

The nerf will heavily push Lee Sin away from his gameplay, which providing pressure in the solo lane through his passive life steal and massive damage dealing abilities, including Sonic Wave, Tempest, and Dragon's Rage.

A monster in the Jungle, Rumble will might have a nerf in terms of his bonus damage that he gives against Jungle creeps that will allow him to clear camps with ease. He might also have his damage from his abilities in general get nerfed as well so that it will prevent him to leave the Jungle entirely.

Riven will also might get nerfed in the upcoming Patch 11.13 Update following her 51.9% Win Rate as a Top Laner in the previous patch update.

In the Hero Buffs, Aphelios and Xayah will might be given a boost following an item nerf within the Patch 11.13 Update. The two mentioned heroes will have their buffs during the implementation of the system nerf for the item, Divine Sunderer, an item that has a Spellblade Unique Skill.

Olaf is also planned to get a buff as well as Dr. Mundo as Riot plans to direct these said buffs into their jungle presence.

The patch update will also switch Viego's role from a solo Mid laner to a Jungle, making his damage against creeps will be increased in some capacity.

Another change in the incoming patch update is the reworked Tahm Kench, whose "Devour" and "Abyssal Voyage" will be switched, with each taking new effects to suit their placement in his skill set.

According to DBLTap.com, Riot should have a better judgement in giving nerfs and buffs to Champions as these decisions might severely affect the meta game in the game itself.

As mentioned, the Divine Sunderer is one of the items that will be changed during the Patch 11.13 Update along with other League of Legends items, including two new items.

Anathema's Chains is a must-have item for Tank Champions. The new item will provide a +650 Health boost as well as a +20 Ability Haste. The item's Active skill, "Vow," lets its user to choose a "nemesis" to put up a Vendetta stack, which lets its user to take up to 30% reduced damage from the "nemesis."

Also, according to Dot Esports, the "nemesis" will receive a 20% Tenacity reduction when near to the item holder thanks to "Vengance."

Also in the new items list is the Hullbreaker. According to Altchar.com, the said item will replace the Sanguine Blade as it represents the bad side of the item rework.

Hullbreaker will give its user a +50 Attack Damage boost, a +400 Health boost, and a +150 per cent Health Regeneration boost.

The item will also have Boarding Party, a passive skill where the user gains a +20-40 Armor and Magic Resist boost and a +20% increased damage to turrets as long as there are no allied Champions nearby.

It also had an aura that will provide nearby large creeps a +60-135 Armor and Magic Resist boost and a +200% increased damage to towers.

Other items that will be buffed during the incoming patch according to Yetter are Luden's Tempest, Liandry's Anguish, Everfrost, Moonstone Renewer, and Ghost Poro Rune.

League of Legend's Patch 11.13 Update is scheduled to be implemented on June 23rd.