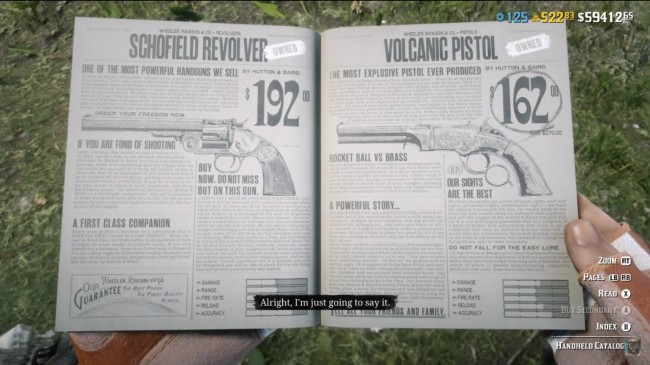 After its weekly update, players of "Red Dead Online" will receive a discount for the pistols on sale.
(Photo: Screenshot from OnlyPVPCat's "Awesome Bonuses and Discounts in Today's Weekly Red Dead Online Update")

Bounty hunters will be having a good time to be a hired gun in Read Dead Online after the game's weekly update. This week's update will give its players, including those who are "outside of the law," a hefty amount of rewards as well as bonuses.

According to Noisy Pixel, Rockstar Games announced the said update in their blog post, saying that they will host a number of said gameplay-related benefits that will be given to its players for their advantage.

These benefits range from discounts on character's cosmetic changes such as haircuts and make-up to doubling up their earned money and experience points (XP).

Plus, Free Roam Missions are paying out Double RDO$ and XP all week long, and more: https://t.co/HgpQSAeLqR pic.twitter.com/b3DxNkGANr

According to GamesRadar.com, several bonuses the players would get during the weekly update of the game included a Double RDO$ (the in-game currency) and XP earned every time players accomplish Free Roam Missions. They will also get an additional 10% XP if they are the same mission while being part of a posse.

Player.One said that those who will finish Legendary and Infamous Bounty Missions will receive two times the RDO$ earned whether the target of said bounty mission is either dead or alive.

Noisy Pixel said that Prestigious Bounty Hunters that are at least Rank 30, on the other hand, will receive a 40% offer off a Stable Stall as well as 2 2,000 Character XP rewards apiece.

Player cosmetics will also get a discount as well with 5 Gold Bars off the Change Appearance fee and a 50% off of haircuts, dentistry, and makeup at all barbers

Noisy Pixel said that Low Honor players will receive a Black Gathered Bandana for free, giving them an additional article of clothing for them to wear for disguise.

Also, players who are connected their Rockstar Games Social Club account to Prime Gaming before July 5th will receive a free emote reward, a 30% discount offer to the Bar Expansion and a Novice or Promising Moonshiner item.

Players will also receive a free Fast Travel all week as well as Persistent Posse Setup Fees will not be charged for the next seven days.