Tinder's New 'Hot Take' Feature: How to Chat to Someone You Like Before You Two Match 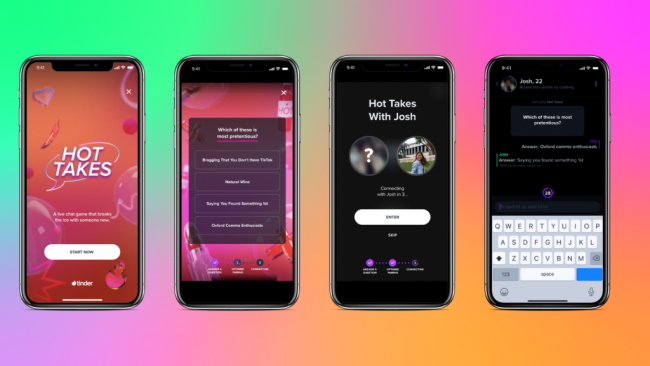 In "Hot Takes," users of Tinder will have a timed conversation with themselves regarding a topic or a question before considering if they are a match.
(Photo: Photo from MobileSyrup.com)

In this time of the Covid-19 pandemic, online dating became an integral part of a person's online lifestyle. Online Dating app had become a conduit for those who are seeking either a close friend to talk to in these hard times, a one-time fling, or even better, someone who will be with you for a lifetime.

Being in a dating app is a hit-or-miss. For every "Swipe Right," you are either lucky to have someone that you swiped right to talk to you or you will wait for that someone to make a move to you.

However, Tinder, one of those dating apps, have a solution in a form of a feature where you can talk to the one that you liked before the both of you will consider a potential match. The dating app announced "Hot Takes," a feature where its users can chat with themselves before they can match.

Is live audio next? pic.twitter.com/z7n8D7EKfY

How Does Hot Takes Work

In Tinder's Hot Takes, both you and a potential match will discuss either a question or a topic. According to Distractify, the feature will connect its users with similar likes and interests and helps to facilitate immediate conversations.

READ ALSO: A Tinder Dating App For Gamers? 'LovelUp' Doesn't Care About Your Looks, Only That You Be Able To Hold Aggro

This will eliminate the times where you will wait for the one that you "Swiped Right" to like you back in order to talk to him or her.

According to IndiaTVNews.com, the feature will also have an in-built timer that will provide timed talks between you and your potential match. As the said timer counts down, both of you will choose if it is a match or let it expire in order to meet someone new in the app.

But the feature will only appear on a specific schedule, according to The Verge. Hot Takes will occur nightly from 6:00PM to midnight local time.

However, it is unclear if the said feature will be permanent in the dating app. According to HITC, Hot Takes is still on its beta test version, however several users wanted the feature to stay permanently.

What to Do During Hot Takes

From the photo that was supplied by MobileSyrup.com, we should know the thing or two how Hot Takes on Tinder works. Like it was mentioned, the feature will only appear at night from 6:00PM to midnight local time.

Once the special Hot Takes page pops up the dating app, you can click the "Start Now" button to begin. Once you entered, you will be greeted by a segment in the feature that will ask you a question or a topic to discuss between you and a potential match.

After that, you will proceed to Step Two - finding a match. It will be random from those who, you swiped right. Once you got that person to talk to, you will be connected to him or her, then the chat will start. If you can't respond for 30 seconds, that chat will be over and you will search for another one.

In order to extend your chat time, you just need on chatting with the one that want to match with.

Aside from Hot Takes, Tinder also introduced several features to heightened up the user's experience in the dating app.

According to The Jakarta Post, the app provided an option for their users to add 15-second long video clips in their profile to provide a little of his and her life, which includes its interests, hobbies, work, and adventures.

Another user feature were users can cycle though any possible matches that share their "tags" they put in their profile pages is also introduced. According to The Verge, the said feature will gave its users more ways to navigate and narrowing their matches based in their interests.

TAG tinder
© 2020 Game & Guide All rights reserved. Do not reproduce without permission.