'KoF All Star' Third Anniversary Collaboration with 'Dead or Alive:' How to Pre-Register, Earn Characters 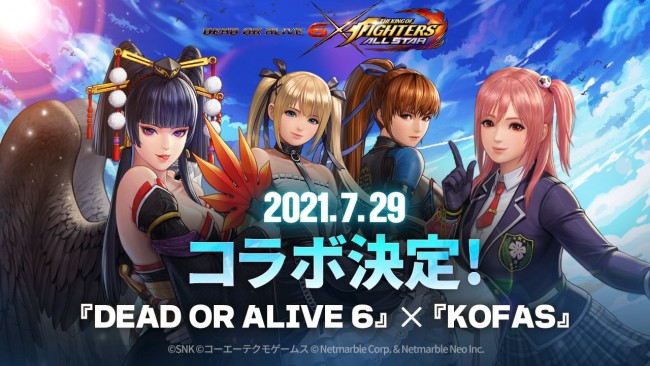 In celebration for its third year anniversary, The King of Fighters: All Star is collaborating with an another famous fighting game series in a form of KOEI Temco and Team Ninja's Dead or Alive.

In this collaboration, the ladies of Dead of Alive 6 will cross-over to the realm of The King of Fighters and joining in the action alongside famous characters such as Kusanagi Kyo, Nikaido Benimaru, Asamiya Athena, and Shiranui Mai.

In the King of Fighters-Dead or Alive collaboration for All Star, four characters from the aforementioned Dead or Alive 6 will be coming to the game. According to Gamasutra, players of the game will look forward in adding Kasumi, Honoka, Marie Rose, and Nyotengu to their roster.

Named as the mascot of the franchise, Kasumi, the nukenin or a "missing shinobi" is a mainstay since the first Dead or Alive in 1996. Appearing to All Star alongside with her is her cousin, Honoka, who is a self-taught fighter and appeared first in the game's 2015 edition, Dead or Alive 5 Last Round.

READ ALSO: SNK Playmore's King of Fighters To Be Released For PS4 In 2016

Also joining in the fray is Marie Rose, the servant of Helena Douglas, who according to the in-game lore, is the current leader of of the Dead or Alive Tournament Executive Authority, the one who oversees the Dead or Alive tournament. Marie Rose debuted in the game's 2013 edition, Dead or Alive 5 Ultimate Arcade.

Finally, the tengu princess, Nyotengu, who debuted in the 2014 update of Dead or Alive Ultimate Arcade, will be arriving to the realm of The King of Fighters: All Star.

The said collaboration will might be also a reunion of sorts of Shiranui Mai, as the kunoichi, who appeared in both the Fatal Fury and The King of Fighters series, made her debut in the Dead or Alive franchise after appearing in the 2016 update of Dead or Alive 5 Last Round as its downloadable content (DLC) guest character.

As for The King of Fighters: All Star, the game itself also had made collaborations in the past. According to Screen Rant, other fighting game titles such as Bandai Namco's Tekken franchise and fellow SNK-made game franchise Samurai Showdown.

Even WWE superstars John Cena and The Rock have also entered the realm of All Star in the past.

How to Obtain the Ladies of Dead or Alive 6

As mentioned earlier, Kasumi, Honoka, Marie Rose, and Nyotengu will be appearing in the The King of Fighters: All Star as part of the game's 3rd Anniversary. According to PocketGamer.com, players can obtain these four characters for free by completing event-exclusive in-game missions.

A "swimsuit version" Character Skin for each these four can also be unlocked and collected. According to Bleeding Cool, they can obtain the Angel of Paradise version of the four Dead or Alive 6 characters, however there are no further details on how they can be obtainable.

Newcomers of The King of Fighters: All Star can also enjoy the said collaboration as well as goodies for the game's anniversary celebration by simply pre-registering.

According to GameFragger.com, they can now pre-register in the game's official website to claim a cupon that will be sent to the email that they have used in the said pre-registration. This coupon can be exchangeable for 3,000 Rubies.