'The Great Ace Attorney Chronicles' Guide: How to Clear 'The Adventure of the Great Departure' Parts 1 and 2 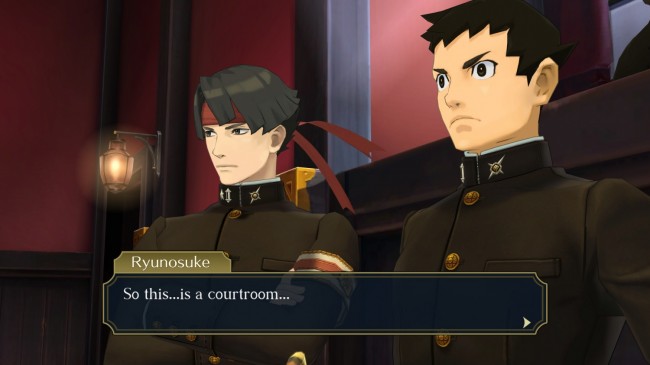 The said game is not like its predecessors in the franchise. It does not feature Phoenix Wright nor Miles Edgeworth, not even Maya Fey. However, it has Naruhodo Ryunosuke and his assistant Mikotoba Susato.

Cross-Examinations return in #TheGreatAceAttorney Chronicles with some new twists. Find contradictions in witness testimonies to discover the truth! pic.twitter.com/2otlKL8OCc

It was not taken place in modern Japan like the usual, as the game sets in both the Meiji Era in Japan and the Victorian Era in England.

But one thing is constant, and it is the fact that players will brace themselves in courtroom drama much like the previous Ace Attorney games, complete with gathering evidences and using their investigatory skills to know the truth.

In their review about the game, NME said that The Great Ace Attorney Chronicles has a surprising depth, which is demonstrated in its two game states - the courtroom and the investigations.

In courtroom, players can examine statements from the witnesses and find any contradictions and inconsistencies. They can also cross-examine multiple witnesses at once, and even pit their arguments against the jury during a "Jury Examination" as a last-ditch effort.

In investigation, players will travel around looking for evidence, collecting testaments and answers while interviewing people, and learning more facts about the case, all of which they can present while they are cross-examining.

This guide will feature these two game states in motion in the a case from the first half of The Great Ace Attorney Chronicles - The Adventure of the Great Departure.

Clearing The Adventure of the Great Departure - Part 1

In this case, Ryunosuke is accused of killing Professor John H. Wilson in a restaurant after seeing him with a gun. Three days later, he ends up in a special trial organized by the government.

His close friend, Asogi Kazuma, represented him as his defense attorney, but in order not to jeopardize his friend's trip to England, Runosuke decided to represent himself with Kazuma helping him to learn the ways of the courtroom.

In order to clear the first part of this chapter, players must follow these steps according to Gamepur. First, they will affirm that Ryunosuke will be the Defense Attorney for himself by selecting "I do." Kazuma will now act as his assistant for the case.

One of the witnesses for the case, Hosonaga Satoru, who is a waiter at the restaurant where the murder happened, will appear before the stand. Once he did this, players will choose to "Interject" even though they were not told to.

When the cross-examination phase begins, they need to present the crime photo showing the victim's bullet wound in his chest to Iyesa Nosa, another witness for the crime. They will present this when Nosa says "The black-uniformed varsity cadet fired on the English civilian! And from the back, the cowardly little weasel!"

In another cross-examination, players need to go through all of the statement and they will not present any evidences in order to move forward. After listening to everything, Kazuma will suggest pressing the witnesses to get more information out of them.

Players need to press Nosa when he says "Furthermore! A visual search of the premises at the time confirmed that we were the only personnel present."

During the following conversation, Auchi Taketsuchi, the prosecutor for the case, will tell that he has a Medical Report Card from the victim. They need to ask for it to be submitted as evidence.

They need to go through the testimony again, and examine the Medical Report Card. They need to turn it around until they see a folded edge. They will click the said folded edge, then the writing inside. This will reveal that the victim could not have been eating because he was under anesthetics.

When another witness, Korekuta Kyurio, says "Indeed. Alone, he was, the Englishman. Dining all by himself," they will present the Medical Report Card, now unfolded revealing said writing.

A question will pop up about who could have been eating his dinner since the victim is not allowed to eat due to medication while everyone besides Ryunosuke swears that there was no woman with him in the crime scene. When the choice arrives, they need to select "An as-yet-unknown third party."

Kazuma will say that someone is telling the witnesses to made a lie about not seeing a woman at the crime scene. When asked by the judge who is doing it, they will select "Satoru Hosonaga."

When Hosonaga demands for proof, examine the waiter's Business Card. Flip it over and look at the test on the front. It will reveal that the waiter is actually a police inspector working undercover. They will go through the dialogue to end the first part.

Clearing The Adventure of the Great Departure - Part 2

In this continuation of the case, according to Gamepur, players need to press Hosonaga when he said "The professor was unable to eat, so I ordered for myself only. A beef steak."

Throughout the dialogue, Kazuma will ask if something they said is meaningful. They choose "It's very meaningful." This will add a section to the statement regarding a carbonated water.

They will present a crime scene photograph when a passage talking about the cheers with carbonated water appears. They will see that there is only one glass present in the crime scene.

After a dialogue, players will be given a choice between is significant - a glass, her handbag, or nothing in particular. Choose "her handbag."

Eventually, a new picture showing her handbag is added to the Court Records. When the game ask them to point out a significant detail, they will present the bull-like mark on the victim's wrist.

They need to link this bull-like mark to the crime scene photograph showing the steak dinner by pointing to the bull symbol on the right side of the hot plate. When the judge asks them to explain behind it, they will choose that the victim is already dead.

When Jezaille Brett enters the witness stand during cross-examination, players will press her when she said "But of course... this country's inferior investigative techniques probably wouldn't pick up on it anyway."

After a discussion, Kazuma will note that Hosonoga is acting weird while Brett was speaking. When they finished talking, they need to press her again regarding the country's investigation process, and they will be guided on how to pursue someone. Once they learned how to do it, they need to pursue Hosonaga.

Hosonaga will add the Bottle of Carbonated Water to the Court Record, which they will show when the statement, "If there's some other way a man's life can been taken without leaving a trace, please, do show me," appears. Players will need to ride out the dialogue to finish the said chapter.