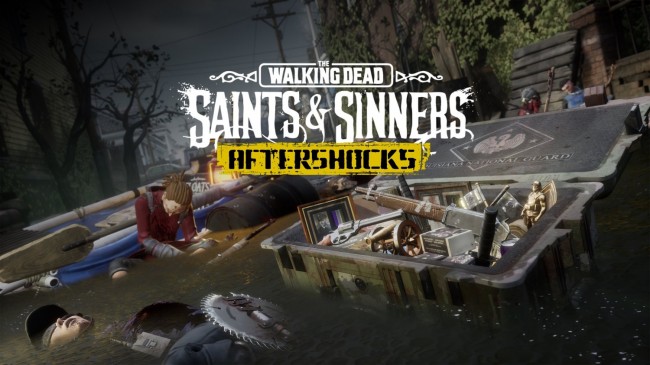 Skydance Interactive announced that The Walking Dead: Saints & Sinners will receive its free update, "Aftershocks." The said update will provide new content to the virtual reality (VR) game, and it came after several delays.

According to Upload, the said launch for the update was supposed to be last May of this year, however due to issues regarding the game working on multiple platforms, as well as upgrading it to a new game engine, it was delayed at the last minute.

A trailer regarding the said update was also released, and according to Cog Connected, it shown a lot of zombies and humans were blown by grenades, as well as people gunning down those that are wearing goat-like masks. This trailer alone might reveal the said new additions to the VR horror-survivor shooter game.

Thank you for your patience, delays are always tough. The team has been hard at work getting all of our game versions to live up to our (extremely high) standards for our first-ever simultaneous cross-platform content release. pic.twitter.com/wWyPktVaIe

According to the developer's post in the PlayStation Blog, Aftershocks would be the second update for The Walking Dead: Saints & Sinners following The Meatgrinder, which also brought in new content including the wave-based The Trial Survival Mode.

What Awaits Players in Aftershocks

According to the same PlayStation Blog post, the Aftershocks update will add new missions, threats, and a new mystery to uncover. The said update, according to The Sixth Axis, will add four to six hours of gameplay.

According to the developers, the missions that are included in Aftershocks, which will be unlocked after completing the quest from The Tourist, are meant for those well-trained survivors that are ready for an extra survival challenge in mind.

Old in-game areas will be revamped with unexpected and deadlier obstacles, making most of the revamped missions will not be played like the same old ones before.

Along with those missions are newly guarded areas, surprise death squads, hungry Walkers, and deadly traps that will shop up where players would least expect them to be, so in a better knowledge regarding the previous maps is needed.

Aftershocks will also introduce the "Reserve Cache," which are the supplies that players need to retrieve during missions. They can use these to craft any weapons that they need for their next mission, ranging from melee weapons to arrows to guns to bombs to medicine.

These Reserve Cache are hidden within the map, and players need to find it through clues that were scattered. These clues will help them point out where the said supplies are hidden. But they need to be quick, or else the Tower and Reclaimed soldiers found these supplies and collect the items inside for their own.

The Aftershocks Update for The Walking Dead: Saints & Sinners will be rolled out on September 23rd. According to Cog Connected, the said update will be free to download and will be available for PlayStation VR, as well as for Oculus Quest and other VR-oriented headsets for the Windows PC.

According to the developers, the update is just a small bite of what they are planning for Saints & Sinners in the future as players will venture further in the post-apocalyptic New Orleans to seek more answers.