‘Deltarune Chapter 2’ Guide: How to Access its Secret Route, How to Find, Defeat Secret Boss 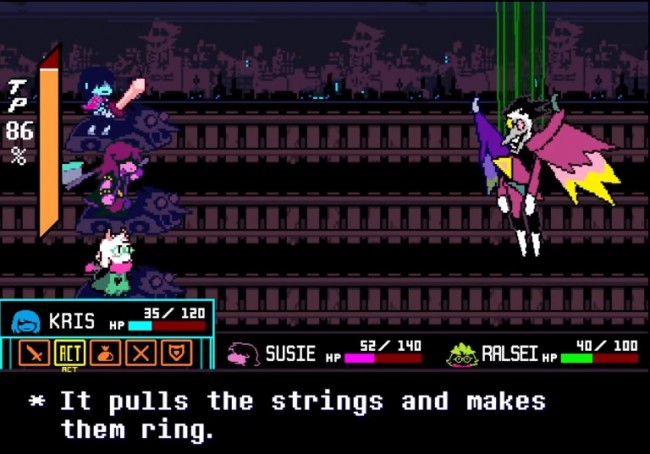 Players of Deltarune Chapter 2 will have an opportunity to fight Spamton NEO once they triggered the Secret Boss fight after accomplishing a task.
(Photo: Screenshot from ManlyBadassHero's "DELTARUNE Chapter 2 SECRET BOSS / Spare & Fight Endings Both Variations")

With the recent release of Deltarune Chapter 2, players of the said role-playing game, which is created by Toby Fox, the person behind Undertale, wanted to play it and venture around it to look for secrets and challenges that might affect its ending.

These secrets, whether if it is a route or a boss, were found either by accident or player's curiosity. But no matter what the reason, players will need to do several tasks in the game in order to trigger these hidden gems.

In order for players to access the Secret Route in Deltarune Chapter 2, players must trigger it first. According to Nintendo Enthusiast, the said route will start as they reach Noelle after Kris and the rest of the party splits up in the Trash Zone.

From there, they will either play in a brand new file or in a file where they chose only peaceful options in the past. Despite of what they are choosing, Noelle will still join Kris in their party. After that, they will immediately start backtracking. Noelle eventually objects, but they will push on anyway.

As they are on the way to the Trash Zone again, they will fight every enemy that will encounter. In these fights, they will need to use only Noelle and her IceShock magic. If Kris defends on their turn, it will give Noelle a chance to replenish enough Tension Point (TP) to cast her magic.

They will need to do this repeatedly as they backtrack in the Trash Zone while ignoring Noelle's objections. Afterwards, they will go all the way to the left, then interact with the locked door. Then, head all the way back to the right, and continue roaming the area.

They would notice that the enemies are spawning in the streets, which they can freeze thanks to Noelle. They need to keep doing this until they reach a room with a poster of a Ferris Wheel. After Noelle freezes the enemies in the room, they will talk to a non-playable character (NPC) on the right.

From there, they will tell the said NPC that they are "something else." When they walk away, the said NPC will offer to sell them a Freeze Ring. They will pressure Noelle to get the ring, which will trigger a cutscene. Afterwards, the NPC will be gone. Once they got the ring, they will equip it to Noelle.

Afterwards, they will continue on, and after deactivating the electric barrier, select "That's natural," when prompted, and continue on to a room that has cars and timers. From there, they will go to the bottom left until they found a hidden room with a dumpster, which it will tell them how many enemies they need to freeze.

Then, they will reach the second Mouse Puzzle, where Noelle will present them with some dialogue choices. They must choose "Proceed" every time, despite her objections, then eventually freeze the electric barrier. Once they are in the third Mouse Puzzle, Noelle will solve it without prompting.

They will continue freezing more enemies, then go back to the dumpster. If they accomplish the target number of enemies frozen, they will offer the Ring of Thorns. Players will buy said item, and equip it to Noelle.

Afterwards, they will go back to the puzzles that they have solved until they will encounter Berdley. When he presents them with another dialogue choices, they will select "Proceed" to trigger a battle. In order to win this, Noelle should have a new spell that costs 100% TP.

After this, it will be a "point of no return," as they triggered the Secret Route. From there, they will play the rest of the game quite differently.

How to Trigger, Win the Secret Boss Fight

In terms of the game's Secret Boss, in order to trigger the said encounter, according to Gameranx, they need to complete a series of objectives. First, they need to go to Spamton and but the Keygen, which they can purchase it for 23 bucks if they are fast enough.

Unlocking it will lead them downstairs to the Basement First Floor. From there, they will go left, then enter the furthest room. A teacup ride will appear to the left, where they will ride down in order to deactivate the forcefield.

Afterwards, they will go further into an extremely dark basement, where they will collect the EmptyDisk from the robot past the forcefield.

Then, they will return to Spamton in the Trash Zone, and give him the disk by selecting "TRANSFER." Afterwards, they will return to the basement in the Queen's Mansion, then return the disk to the same robot. They will walk back, and then Spamton NEO will appear. This will trigger the Secret Boss fight.

To defeat Spamton NEO, according to Gamerant, they must shoot down any of the blue objects will came out from it using the bullets from their soul. Afterwards, they will use either the "SNAP" or "SNAP ALL" Act Command to snap all of its wires and increase its MERCY meter. A regular "SNAP" will increase its MERCY by only 2%.

Also, players need to focus at any of Spamton NEO's exposed parts, as they can target and break them in order to stop the bullets from being fired out of them. Breaking them will leave them destroyed at the end of the battle.

The rewards for this battle will depend on how players "defeat" the Secret Boss. If they destroyed it completely through attacks, they will receive a Puppet Scarf, while cutting all of its wires would get them the Dealmaker.

The former is a weapon exclusively for Ralsei, while the latter is an armor that will increase the wearer's defense and increases money earned from battle.

But no matter what the reward they would get, they would still receive the Shadow Crystal, which can be used in the future Chapters of Deltarune.