'Deus Ex' Lay D Denton Project Mod Walkthrough: How Does It Work, Where to Download 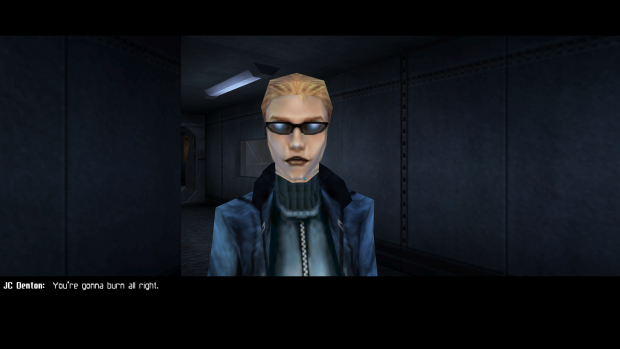 Several developers have come up with a mod for the original Deus Ex, named The Lay D Denton Project, which the players of the futuristic action role-playing game can play as the female version of its protagonist, JC Denton.

The reason behind the said mod, according to The Gamer, is because they want to bring back the gender selection feature in the game, which was cut during its early development stages before it was released two decades ago.

How Does the Mod Works

The developers behind The Lay D Denton mod were focused on four aspects in order to make it work in the original Deus Ex. One the said aspects was the voice dialogue for the female protagonist.

You can now play DX1 as a Female JC Denton!

Lay D Denton Project allows you to play as a customizable female Denton (a feature Ion Storm originally wanted to include in the game).

According to Kotaku, they focused first on re-recording all of JC Denton's 1,700 line of dialogue, which was redone by a voice actress.

According to a post regarding the said mod in ModDB.com, the developers hired Karen Rohan as the voice of JC's female version, with the guidance of voice director Chris Rohan, who has an extensive knowledge of the game's story, dialogue, and community.

According to the developers, the said re-recordings will faithfully preserve the protagonist as every line was performed directly after the voice actress listened to the readings of its original voice actor, Jay Anthony Franke, while trying not to blatantly copying them.

Instead, the original readings were used as a primary anchor for the re-recordings, with variations that were only made after several careful considerations.

Another aspect that the developers focused on while working on the mod is the pronouns in all of the game's dialogues and text.

As they worked on the said game elements, they encountered several unique problems, which they solved using different techniques. This is to make all of the gender pronounce and references that was used in the game's dialogues will reflect to the female protagonist.

Aside from that, the developers also considered the natural cadence of the human speech, as well as the natural sensitivity of the human ear towards abnormalities in speech, making the said part of the mod the "most challenging" effort from their part.

The developers also worked on the game's non-playable characters (NPCs) during the development of The Lay D Denton Project.

According to the same post in ModDB.com, they added in new tertiary NPCs, which will be scattered throughout the game, and designed to be unobtrusive. Aside from the new ones, the old NPCs of the original Deus Ex were either recast or altered to suit the said female protagonist.

Finally, the developers also restored the model for the female version of JC Denton, with its sounds for several actions such as jumping, running, getting hit and dying re-recorded. The first-person view model was also altered to match the selected skin tone and was tweaked in order to make it more feminine.

Its user interface (UI) was also altered, including the screens for the limb damage, health, and augmentations, in order to have a female body displayed in them.

The full Version 1.0 of The Lay D Denton Project mod for the original Deus Ex is now available for the download in ModDB.com for Windows PC and Mac.

READ ALSO: 'Deus Ex: Mankind Divided' Release Date; What You Need To Know About The Game

TAG Deus Ex
© 2020 Game & Guide All rights reserved. Do not reproduce without permission.