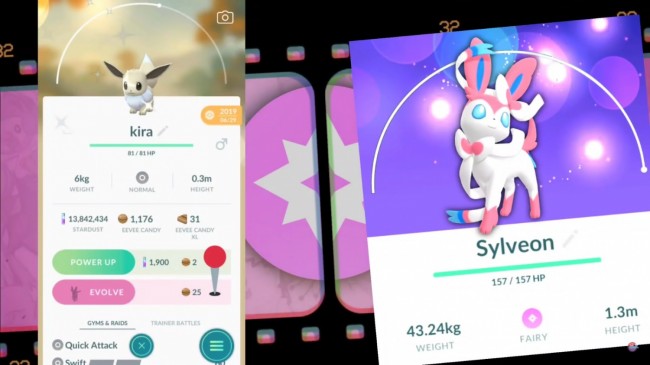 Pokemon Go players will have a chance of having a Sylveon by pulling off a trick on their Eevees -- by nicknaming them "Kira"
(Photo: Screenshot from Poké AK's Video "How to Evolve Eevee into Sylveon in Pokemon GO // How good is it // Sylveon Name Trick")

Fans and players of Pokemon Go will now have a chance to complete their Eeveelution collection as the last of Eevee's Evolutions, Sylveon, makes its glorious debut in the mobile app. The Fairy-type Pokemon, who first appeared in Pokemon X and Y, was added to the second part of the ongoing Luminous Legends Y campaign of the said mobile app. The 2-week event will also feature the legendary Pokemon Yveltal to the game.

How to Evolve Eeeve into Sylveon Name Trick

In Pokemon Go, Eevee had unique evolution requirements that make it evolve into its elemental evolutions including the aforementioned Sylveon. Players can evolve their Eevees into a flock of Eeveelutions with just one easy trick - by giving their Pokemon a nickname.

Nicknames are a feature in Pokemon Go where a player wants to give their Pokemon an identity as if they are the reflection of its trainer. For an Eevee, having a nickname means it has a predetermined Eeveelotion.

Sylveon, the Intertwining Pokémon, is making its Pokémon GO debut during the upcoming Luminous Legends Y event! You’ll be able to evolve your own Eevee into Sylveon by earning hearts when it’s your buddy. pic.twitter.com/smsfzTAA38

But before you evolve your Eevee into a Sylveon (or a Jolteon or a Flareon or an Espeon or any of its Eevelutions) using that unique nickname, you must need 25 Eevee Candies, a pre-requisite for an Eevee to evolve. You can amass a number of these considering that by the game's standards, an Eevee candy is fairly cheap.

Once you have 25 Eevee candies, you may now give your Eevee a nickname. In a game guide published by Forbes, you must name your Eevee companion "Kira" in order to start its evolution process. Once you input the nickname, you will see a silhouette that will appear underneath the "Evolve" button. Tap that, and you will get your Sylveon.

NIckname Tricks on Other Eeveelutions

The nickname trick is also effective on other Eeveelutions. In a Gamespot's guide for the game, you can name your Eevee as follows if you want to evolve it into its respective elemental forms - "Rainer" for Vaporeon, "Sparky" for Jolteon, "Pyro" for Flareon, "Sakura" for Espeon, "Tamao" for Umbreon, "Linnea" for Leafeon and "Rea" for Glaceon.

Other tricks for the other Eeveelutions aside from the nickname trick can also be found in this guide.

In an article by Comicbook.com, aside from the chance of obtaining your own Sylveon, the ongoing Luminous Legends Y campaign will also have Shiny variant of the Galarian Zigzagoon as a 1-Star raid boss or as a reward after you complete the "Win a Raid" research challenge. Apart from the Shiny Galarian Zigzagoon, more Dark-type and Fairy-Type pokemon will appear as party of the campaign.

The second part of Pokemon Go's Luminous Legends Y event will run from 10:00 AM local time to 8:00 PM local time on May 31st. Players may also obtain a Sylveon and the Shiny Galarian Zigzagoon as they will be available on the game after the said event ends.

READ MORE: 'Pokemon GO' Guide: How To Get Shiny Magikarp Or Red Gyarados

League of Legends' "Rise of the Sentinels" Event Guide: How to Solve the Web ...