Nintendo’s ‘Game Builder Garage’: What Tools Are We Expecting in This Game Creator System 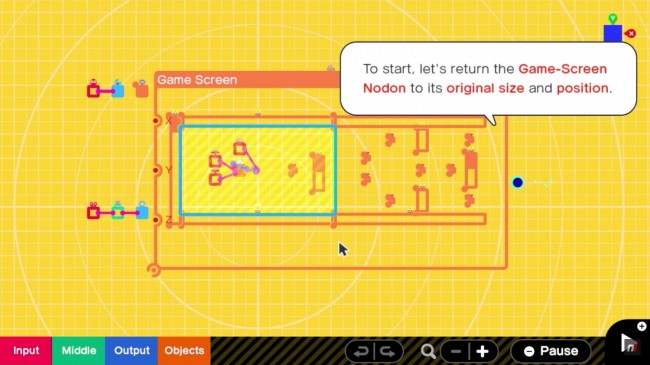 The interface for Nintendo's "Game Builder Garage," which features the "Nodons," creatures that holds commands that are essential for the game you are developing.
(Photo: Screenshot from Nintendo Life's "10 New Things In Game Builder Garage on Switch | Online Sharing, Cameos, Music & More!")

After the successes of both the Labo kits series and the Super Mario Makers series, Nintendo opens up another door for its fans to expand their imagination with the announcement of "Game Builder Garage." This new standalone game gives an average player or an aspiring game designer a fun and approachable way to develop his own very game.

In a trailer released by the game developing company, "Game Builder Garage" provides simplistic yet easy-to-learn tools that can educate anyone in terms of game development and design while enjoying it because of its whimsical and colorful graphics that even kids would love.

Players of "Game Builder Garage" will be introduced to the Nodons, the "colorful creatures packed with personality," as Nintendo described them in their webpage for the game. These Nodons will act as your building blocks and guides as you progressed in making your own game.

Check out the latest trailer for #GameBuilderGarage to see how interactive lessons featuring the cute and mysterious Nodon will help you make games you can share with the world!https://t.co/zPyQpXm3Ep pic.twitter.com/ROpMzOY6vQ

These creatures will provide you the actions and elements needed into your creation as they will tell what you want to execute within the game that you want to develop, whether a character or its movement. According to guide made by NintendoLife, there are over 80 different Nodons available to play around with in "Game Builder Garage," each has its own monster-esque aesthetic and functions.

As explained by Mashable SEA's article, these creatures are seen on the programming screen as boxes each holding a command. By connecting every Nodon through drawing a line between them, you are mapping out commands.

Each of the Nodons' functionality will be explained by Bob, a blue bouncing dot that will walk you throughout your game's development stages.

You can also have up to 500 Nodons inside of your project, meaning that the possibilities within your own game are endless.

The "Lesson Mode" in "Game Builder Garage" has seven games packed in it that you can work with as you learn about game design. According to an article by IGN, the games were there to explain the process of coding for a game. These were made with the game's primary audience in mind - those who are unfamiliar with coding, especially kids.

Many of these lessons, however, will show the "wrong" way of doing things before introducing the correct ones. These small and intentional "mistakes," according to Mashable SEA, opens the door to a sub-lesson that will teach you the nuances of the Nodons that you are using.

By letting these things go wrong in a controlled environment full of guided instructions that also serves as a tutorial, the game will give you a glimpse of how underlying mechanics work.

Time to Take Off those Training Wheels

Once you learned everything from those seven pre-installed games, you will now be introduced to the game's "Free Programming" mode. This is where you can showcase what you have learned from those lessons.

In this mode, you have a large list of Nodons that you can use for your very own game.

Once you finished making your own game, you can share it with your friends and family. "Game Builder Garage" has a feature where every game you created has a custom Game ID that you can share online for other players to download.

This feature, however, has its disadvantage. According to NintendoLife, "Game Builder Garage" will not have a "Super Mario Maker 2"-esque in-game hub to browse and find new games. Instead, you will have a tedious time to find a Game ID online or have a Game ID given by a friend.

However, you can distribute your programming code through local wireless play, which means you can share ideas with a fellow aspiring game developer.

All of these tools and more awaits every player in "Game Builder Garage," which is set to be released on Nintendo Switch this coming June 11th.

READ ALSO: Every Household Should Have More Than One Nintendo Switch, Says Nintendo