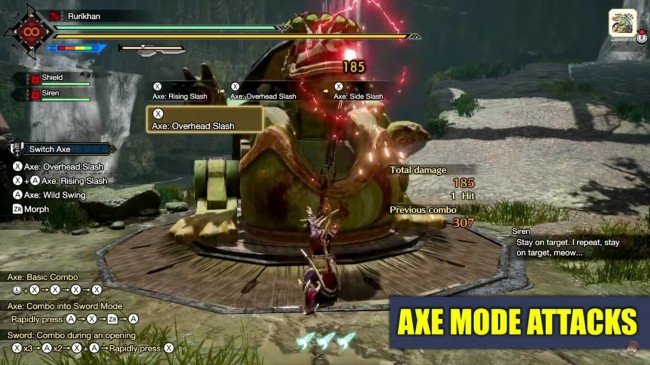 With the recent Patch 3.0 Update launched, players of Monster Hunter Rise will face new monsters such as the Crimson Glow Valstrax and the Apex Zinogre as well as a new possible ending for the game.

As you prepare for the challenges the newest patch update has given, you will need to be proficient in a weapon and a skill altogether. One of the weapons in the game that you need to learn is the Switch Axe.

"A great weapon for beginners," according to an article by Fanbyte, the Switch Axe is one of the fourteen weapons in Monster Hunter Rise that has an ability to dish out tons of the damage in its Axe Mode while charging it up in preparation for its Sword Mode, where it can dish out swift attacks and explosive finishers to the opponent.

Challenge the lord of thunder and brave its ferocious sparks!

What is so great with a Switch Axe is the fact that it has a good weapons reach as well as mobility that even beginners of the game can enjoy.

READ ALSO: 'Monster Hunter Rise' Patch 3.0 Update: New Monsters and How to Unlock Them ALL

In order to understand further the Switch Axe's power, you learn its basic attacks as well as attacks that are attainable once Switch Skills are unlocked.

Wild Swing is a basic attack where you can unleash an unlimited slash attack until your stamina runs out. Follow up that attack with Heavy Slam, a high damaging combo-ender to Wild Swing that powers up your Axe before slamming it on the target foe.

Following it up is Fade Slash, an evasive maneuver that allows you to make distance from your target. A good breather if your stamina is depleted after the Wild Swing.

On the other hand, the Switch Skills that you want to learn after you unlocked them through quests are the Forward Overhead Slash and the Compressed Finishing Discharge. The former can be switched with the Forward Slash attack and can hit those parts that are high on the ground followed by a Double Slash in Sword Mode.

You can learn its controls, as well as possible combos that can be made and how to use the Switch Gauge, in these guides made by Game8.com and Gamewith.net.

There are Silkbind Attacks that you need to remember if you are using a Switch Axe, especially when you want to use it in search of the new monsters the Patch 3.0 Update had. "Switch Charger" enables you to regenerate your Switch Gauge while being launched forward by a Wirebug.

This move also negates the decreasing of your Switch Gauge for a short time, making you use the Sword Mode even longer. It is great for either giving your opponent swift and powerful strikes or quickly land a devastating finisher to it.

"Invisible Gambit" enables you to charge to your enemy without worrying about knockouts. The forward dash move will serve a three-slash combo to the opponent while giving you a knockback protection during its duration.

Use this move to tank your opponent with severe blows while not concerning about you getting thrown off.

Patch 3.0 Update introduces a new Silkbind Attack to the Switch Axe - the "Soaring Wyvern Blade." This attack consists of an upward slash with the help of a Wirebug, followed by a Forward Slash to a targeted foe.

Once the Forward Slash was landed successfully, it will fill up the Activation Gauge and creates a large explosion. This attack is perfect for evading enemies as well as landing them an unexpected blow from above (with added explosions).

You can learn the controls behind these Silkbind Attacks through these guides made by Game8.com and Gamewith.net.

A unique feature for the Switch Axes, the Phials are qualities that makes the weapon stand out from the rest.

Each Switch Axe along a specific tree have unique phial types - Elemental Phial, which deals an increased elemental damage, Dragon Phial, which gives the Switch Axe an amount of Dragon Element, Power Phial, which boosts the weapon's raw damage, Paralysis Phial, which adds a paralysis effect in its every attack, and Exhaust Phial, which drains an opponent's stamina after receiving a certain attack from the weapon.

In order to unleash the Switch Axe's potential, one must know the right build for it. There are many builds that are suitable for the weapon, which is broadly explained by Game8.com's guide, but we can show one of them that you can use.

For the patch 3.0 Update, the Rampant Slicer S is the recommended Switch Axe for its flexibility. In the same guide, it was customized into a non-elemental Switch Axe with an Exhaust Phial and a Sharpness Type IV.

They set their Talisman Skill to Lv. 2 Evade Extender. Their decorations for this build are as follows - three Attack Jewel 2, three Razor Jewel 2, a Quickswitch Jewel 2, a Tenderizer Jewel 2, and three Drain Jewel 1.

This build is a straightforward one that maximizes you Rampage Slicer S. This build focuses more on boosted attacks, exploiting your opponent's weakness, and draining its stamina while it increases mobility in both Sword and Axe forms.

You can also look at the guide, and the one from Gamewith.net, for other builds for the Switch Axe, as well on how to craft it.

How to learn Counterstrike

Both "Invisible Gambit" and "Compressed Finishing Discharge" are good ways to counter any knockback effects from the monsters. However, these boosts are somewhat temporary, and you will be suspected to knockbacks again. To ease this, you must need to learn "Counterstrike."

Counter Jewel 2 is the only Decoration that has Lv. 1 "Counterstrike."

You can look at the same guide you want to learn how to craft these Armor Pieces and the Decoration as well.

TAG monster hunter
© 2020 Game & Guide All rights reserved. Do not reproduce without permission.