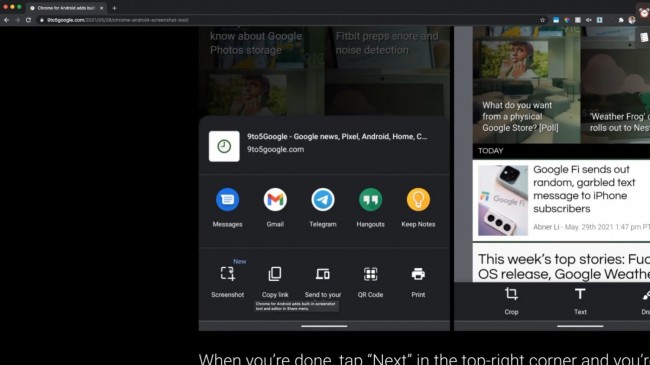 The interface of the "Screenshot" tool that will be installed in every Google Chrome browsers in every Android phones once the browser's Chrome 91 update is released.
(Photo: Screenshot from UNBOX TECHIE's "BREAKING: Google Chrome for Android - Secret Screenshot Feature??")

Sharing Screenshots in your Android phones will be much easier in your Google Chrome browser as a new built-in tool will be launched as part of the browser's Chrome 91 update.

This new Screenshot tool will be part of the other options that will be on the browser's Sharing Menu alongside Copy Link, Send to Your Devices, QR Code, and Print once the update is in effect in every Android phone. Google introduced the said menu as part of the update for August 2020.

In an article made by Gadgets360, the Sharing Menu in Chrome for Android was reorganized and has three rows. The first row has the web page's name, URL, and its favicon, while the middle one has the list of social media apps that the user has for easier sharing.

On the bottom row is the mentioned options menu which included the newly installed Screenshot option.

According to an article by GadgetsNow.com, the Screenshot option gives its user the ability to capture a screenshot of an entire webpage, including its URL. Users can also Crop, Draw, and add Text to the screenshot using this option. This will eliminate the tedious process of pushing multiple buttons just to take a screenshot.

Chromeunboxed.com extensively explained the said options within the Screenshot feature in their article regarding it. According to them, users may choose the color of both their text and drawing tools as well they can adjust the pen thickness, text size and alignment.

Tools for undoing and redoing tasks are also there as well.

After modifying their screenshots, users may either save or share after tapping the "Next" tab on the top right corner of the screen.

According to the same article, the feature itself is a Chrome-specific feature that can be accessed on any phone that has Google Chrome as its browser, no matter if that phone does have its own screenshot feature or not.

According to an article by 9to5Google.com, the feature replicates the Markup tool, which was introduced in Android 11 and later on updated for the Android 12.

Google Chrome's Version 91 Update will be rolled out within this week, and promised to come with a number of fixes and improvements aside from the additional Screenshot tool.

According to GadgetsNow.com, once the update is implemented, the collapsed Group Tabs will take up less space. The update also freezes inactive Group Tabs, with the exception of several tabs that have unavoidable background process running like playing back media.

in terms of security, the browser, like the Google Chrome browser for the iOS for example, will warn their users if they save their password on a phishing site. Google also fixed 32 other vulnerabilities for the release of this update.