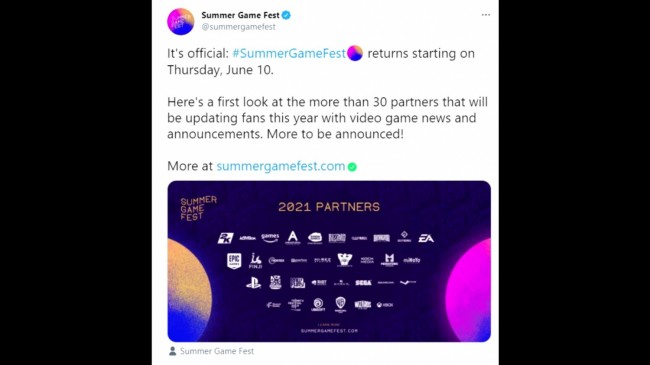 The Summer of 2021 is the season of new game releases and announcements and the incoming Summer Game Fest 2021 will have those in their line-up as they kick off the summer video game event this month.

Summer Game Fest was created last year to fill in the void created by the cancellation of in-person gaming events such as the Electronic Entertainment Expo or E3 due to the Covid-19 pandemic.

Hosted by Geoff Keighley and presented by Amazon Prime, the event will host several announcements and launches from different game platforms, producers, publishers, and developers that will be live streamed for everyone to see.

The fun begins live on Thursday, June 10 with Kickoff Live! a spectacular world premiere showcase of announcements, hosted by @geoffkeighley with a performance by @weezer, Day fo the Devs and more.https://t.co/1ZwAhZ66ie pic.twitter.com/8RBfYt1364

Aside from announcements, the event will also have live musical performances from guest performers.

READ ALSO: SNES Classic Edition Reportedly In The Works, To Be Announced At E3 2017

The event itself will kick off this coming June 10th, Thursday, at 11:00 am PDT (2:00 PM ET/7:00 BST), and it will be livestreamed on The Game Awards' YouTube Channel, Twitch, and Twitter Gaming.

In an interview for GameSpot, Keighley said that the show will highlight around 20 new games as well as updates from live service titles.

From there on, he will pass the baton to the presenters who will showcase the trends within the video game industry as well as what to expect from them in the latter half of the year and in the coming 2022.

The day after the Kick Off, Keighley will join with @NetflixGeeked for the "Netflix Geeked Week" where the video streaming platform will debut video game-based shows and films.

CNet.com confirmed that Ubisoft will have its "Ubisoft Forward" in the event this coming June 12th, while according to GameSpot, Xbox and Bethesda Games will have its Joint Showcase on June 13th.

Also in the Summer Game Fest 2021, Steam's "Next Fest" will expected to happen on the event on June 16th and will be filled with video game demos to see.

Sega's "Sonic Symphony Orchestra" will play their versions of iconic Sonic tracks at the event on June 23rd.

Devolver Digital, the makers of "Fall Guys," will reveal four new game titles in an undisclosed date within the event.

Keighley also revealed in a video posted in the game's Twitter account that they will be hosting "Day of the Devs," a digital event made possible by Double Fine and iam8bit. The event focuses on showcasing video games that are made by aspiring indie game developers that will rock the industry once released.

He also said in the video that he will his best to deliver the latest in the video game industry and added that the month of June will be a big month for the industry itself.

"No matter what game platform you like, what publisher you like, what event you've following, we just want to deliver a lot of excitement about games and the industry this June," he said.

For more information about the event, you may visit the event's website, summergamefest.com.