Apple's 'Facetime' for Windows and Android Arrives: How Can You Get It 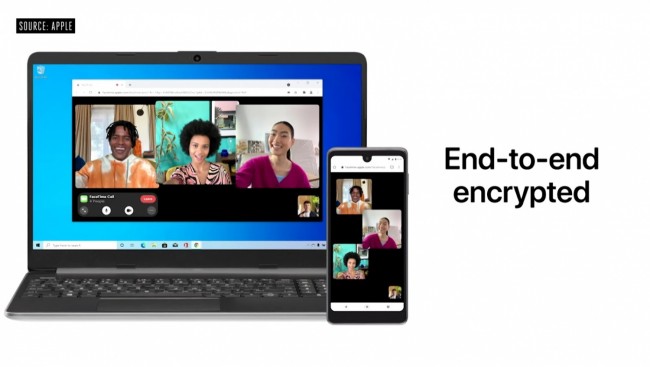 As revealed in the Worldwide Developers Convention by Apple, users of "Facetime" can now enjoy video calls thru Android and Windows via web browser.
(Photo: Screenshot from The Verge's "Apple WWDC 2021 keynote in 23 minutes")

With the Covid-19 pandemic restricting most of us from going outside and talk to other people whether for work or for personal like our family and friends, we are now relying to video conferencing in the past year. Nowadays, platforms such as Skype, Zoom and Google Meets are an essential for us.

This year, Apple will enter the wide market of video conferencing as they announced in their Worldwide Developer Conference, or WWDC, that their video calling service, Facetime, will be accessible on Android and Window platforms.

Facetime for Android and Windows

According to Livemint.com, the company did not announce the exact date for the release of the said video conferencing app, which is an exclusive only for Apple's iOS, MacOS and iPadOS, but according to The Verge, they will launch it as web feature with the newly released iOS15 this Fall.

FaceTime updates - Spatial audio + voice isolation with the option of wide spectrumpick up everything!

They did not also announce how will Facetime works on both Android and Windows, but according to WCCFTech.com, Apple made it clear that the users of the newly released iOS15 can share their Facetime web links to invite their family and friends to the conversations.

The app will also allow its users to share a link to a call with other users so they can join in with the conversation from their web browsers. According to CNBC.com, the company assures the calls will be private and they were still protected with the end-to-end encryption.

How to Run Facetime on Windows and Android

In order to run Facetime through their web browsers, they must have the latest version of either Google Chrome or Microsoft Edge.

Aside from the integration towards Android and Windows, Facetime will also have other upgrades that was announced in the WWDC. According to WoodTV.com, the app will introduce a new grid interface so that you can enjoy those video calls with same-size tiles.

Additional to that, a Portrait Mode will be launched, where you the camera will focus on the user only while doing video calls and not its background, along with the Voice Isaolation, which minimizes any background noise and puts the user's voice "front and center."

Another feature that will be integrated in Facetime is the new feature called "SharePlay." According to Apple, this feature will allow a group of Facetime users to watch or listen to a same thing at once, while keeping up with the conversation.

SharePlay can stream their favorite TV shows, movies, or music while having a Facetime call with other. They can also see their reactions from what they are watching with the help of its synced playback and controls. It can also automatically adjust the volume of the show or the movie they are watching so that they can keep talking and listening to each other.

Digital streaming platforms such as Disney Plus, Hulu, HBO Max, and Twitch are working with Apple to provide support for Shareplay, says Livemint.com.

According to The Verge, because of this feature, virtual watch parties during the pandemic will be more enjoyable while making Facetime into a hangout space for everyone rather than just a way to make convenient phone calls with their close relatives.

'Fortnite' Chapter 2: Season 7 Alien Artifacts Guide: Where to Find Them