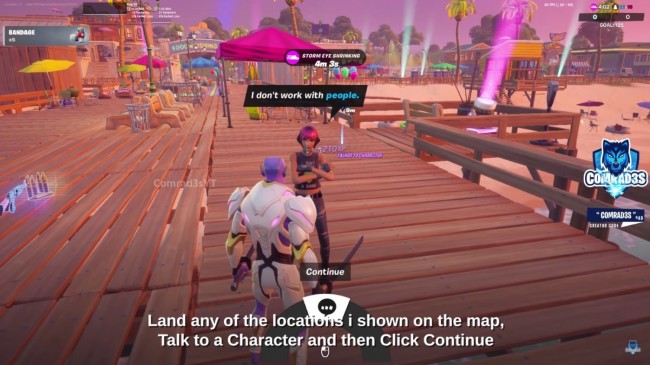 In one of the "Legendary Challenges" for Fortnite's Season 7, players will look for one of the NPCs in the map that will talk to you about the "alien invasion."
(Photo: Screenshot from Comrad3s' "All Week 1 Legendary Quest Challenges Guide in Fortnite Week 1 Quest in Chapter 2 Season 7")

The aliens have come to invade the realms of Fortnite as the game kicks off its Season 7 with its series of weekly quests. Players of the first person shooting game will experience said challenges in the new battle pass for the season on a new map along with several changes.

This is also an opportunity for them to grind as these challenges are also good stomping grounds for them to level up.

Fortnite has two kinds of weekly challenges - the Epic Challenges and the Legendary Challenges. In this guide, we will be focusing on the latter as it will give you a large amount of XP as a reward once you accomplish one of them.

Challenge 1 - Talk with the NPCs

To start with your weekly Legendary Quest, you must first approach the non-playable characters (NPCs) within the game. For its Season 7, Fortnite introduces the new NPCs.

READ ALSO: Fortnite 'Foreshadowing' Quest Guide: Where to Locate the TV Sets Within the Game

According to GamePur.com, players can talk to Sunny, Abstrakt, Riot, Bushranger, or Dreamflower regarding the "alien invasion." These NPCs are scattered within the island, so you need to go to an NPC that is closer to your location.

Dreamflower is located in a house at the Flopper Pond, to the southwest of the Believer Beach.  Bushranger can be found along the river to the north of the map's center near the Mothership area, while Sunny can be seen at the pier in the Believer Beach near the restaurant.

Riot is located at the east of the Misty Meadows, while Abtrakt is in the northern area of Retail Row.

You can talk to them by selecting the conversation bubble in the game. Once you talked to either three of them, you may now proceed to the second challenge.

For the next challenge, players will collect some stones in the map. For that, you need to go in the center of the map, known as "The Aftermath."

Once you are in the location, you can now harvest some stones with the help of your pickaxe. The challenge is done when you collected one hundred stones.

According to Attack of the Fanboy, there are two different types of stones within The Aftermath - the normal-looking ones on the edge of the crater, and the metallic, shiny ones near the center of the crater.

You must not collect the metallic ones and focus on collecting the normal ones. You can break the bigger ones using your pickaxe.

The 3rd Legendary Quest will focus on collecting the IO Tech Weapons. These tech weapons are not just quest items, but also new weapons that are introduced for Fortnite's Season 7. These new weapons include the Recon Scanner, the Pulse Rifle, and the Rail Gun.

According to Attack of the Fanboy, these weapons are scattered throughout the map, and the locations were highlighted with a distinct red light that you can see from the sky. You can land on those locations and collect the IO weapons, which is stashed in a wider yet distinctly designed chest. You can also collect the said weapons that are dropped in the normal chests.

You can also grab the IO tech weapons by eliminating the IO guards, the NPCs that are guarding said weapons in outposts.

In this challenge, players will be collecting three different IO Tech Weapons. You do not need to collect all three weapons in the same match, nor picking up the same weapon multiple times overall.

Another new NPC that is introduced in Season 7 is Bunker Jonesy. Unlike any NPCs which can be found in an easily located place within the map, Bunker Jonesy doesn't have a location in the game.

According to Sportskeeda.com, the NPC lives alone in a cabin at the bottom of the map, fitting for the character's detachment from the Fortnite world.

In order to find him, you must find his cabin. You can land nearby the bottom part of the map and run down the mountain to the cabin. Once you are in the cabin, you will find Bunker Jonesy's conspiracy board, which is right inside the door.

Your last challenge to complete your Legendary Challenge lineup is to roam the map for locations where you place rubber ducks. These squeaky beings will be the key to finish the said quest.

In a guide from GameSpot.com, there are three locations that you can place your rubber ducks - Retail Row, Pleasant Park, and Believer Beach.

For the first location, you can drop near the basketball court on the southeast corner of the Retail Row. The rubber duck's location within the area can be sometimes on the court or next to the nearby house.

For the second location, look for the gas station along the eastern road in the village of Pleasant Park. You can see the location for the rubber duck either at the right against the podium or by the bleachers on the soccer field.

For the last location, search around the pool in the Believer Beach near the eastern parking lot. You can see the location of the rubber duck at the right on the lip of the pool.

Once you finish locating the rubber ducks, you also finish all the Legendary Challenges for Season 7's week one.

TAG fortnite
© 2020 Game & Guide All rights reserved. Do not reproduce without permission.