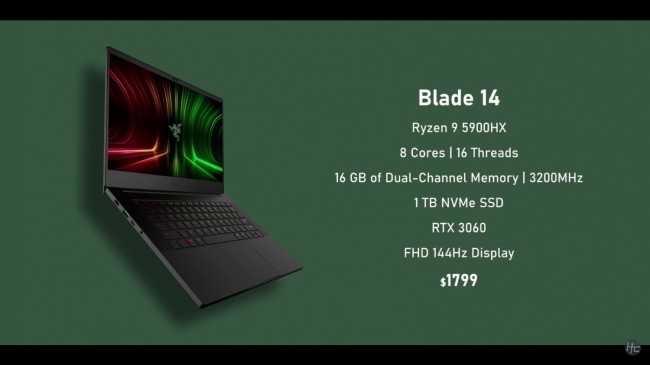 The Electronic Entertainment Expo (E3) 2021 has a lot of surprises ranging from new video game releases and announcements to reveals of the newest gaming hardware, such as the Razer's debut of a new gaming laptop.

Called the "Ultimate AMD Gaming Laptop," the Razer Blade 14 is the culmination of the new partnership between the video game hardware manufacturers and AMD. In the online presentation for the E3, Razer chief executive officer Min-Liang Tan described the laptop as "the laptop that is 10 years in the future."

In a press release posted on Business Wire, Brad Wildes, Razer's Senior Vice President and General Manager of Systems Business Unit, said the laptop itself will "shake up" the video game industry while combining their experience in crafting ultra-compact and high-end gaming hardware.

Meet the all-new Razer Blade 14—the world’s most powerful and thinnest 14” gaming laptop built with an @AMD Ryzen 5900HX processor and the latest @NVIDIAGeForce RTX 3080. Experience the ultimate AMD laptop for uncompromising performance that can’t be beat: https://t.co/XtfhqzKtyL pic.twitter.com/jOYVvhOTMS

The successor of the previous 14-inch Razer Blade, which was rolled out in 2013, the Razer Blade 14 is the souped up version of the said gaming laptop with high end hardware inside.

According to USA Today, the gaming laptop still has its 14 inches of diagonal size, with thickness that is only .66 inches thin and weighs less than four pounds. Despite of the physical measurements, the gaming laptop has to pack an AMD Ryzen 9 5900HX processor.

With the said processor installed in the laptop, players and users alike will experience its processing power which can handle even the most resource-hungry AAA games and programs smoothly while remaining its incredibly efficient 12 hours of battery life.

Accompanying the aforementioned AMD processor is the NVIDIA GeForce RTX 30 Series graphics processing unit, which is built through the NVIDIA Ampere Architecture. The said GPU will give the most realistic ray-traced graphics up to 68 FPS and cutting-edge AI features.

According to The Verge, users will see these features created by the said NVIDIA GPU in the laptop's up to 1440p QHD 165Hz monitor or its optional FHD 144Hz display monitor, which both are IPS-grade panels that offer excellent color coverage.

The laptop also boasts its Vapor Chamber Cooling feature, where it can dissipate its generated heat quietly and efficiently through the evaporation and condensation of its internal liquid. According to Venturebeat.com, the cooling feature has two fans, each have 88 blades that are .1 mm thick.

USA Today said that the Blade 14 also has the THX Spatial Audio 7.1 surround sound, while Tom's Guide said that it has a 1 TB PCIe SSD storage and a 16 GB DDR 3200MHz RAM.

With these promising yet powerful specs, the Razer Blade 14 will not come cheap. According to Tom's Guide, the least expensive variant of the laptop, the one that has the RTX 3060 graphics card and a 1080p screen, will cost $1,799, while the RTX 3070 version will cost $2,199.

USA Today also said that the one with the QHD and the RTX 3080 graphics card is the expensive one with $2,799. The Razer Blade 14 is available now and can be bought via Razer's website, razer.com.