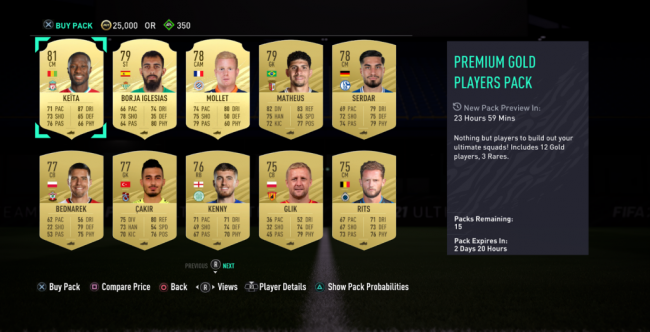 A screenshot of the "Preview Pack" feature, where players of FIFA 21 will have the power to look at the packs that they want to buy.
(Photo: Photo from EA Games' FIFA 21 Website)

Players of "FIFA 21" can now look at what they are getting before deciding if it is worth it or not. Electronic Arts (EA) pushed through a new feature for the game's "Ultimate Team."

The new feature is part of the game's new update, which was made after close scrutiny and pressure coming from various regulatory bodies such as governments, children's welfare groups, and gambling charities.

According to Hypebeast.com, this is after said parties are concerned for the game's "surprise mechanics," which is often been tied with gambling.

EA lootboxes are no longer a mystery with new @FIFAcom Preview Packs, but only for a limited time https://t.co/xtTD6pBww9

The "Ultimate Team" game mode, which the tool will be used for, is "FIFA 21's" take to Fantasy Drafting. To put it simply, in this team mode, you will be your own Football Team manager as you will enlist players from different teams to be part of yours.

This includes prolific players from different soccer leagues like the UEFA, Bundesliga, and La Liga.

Not only you pick your own teams, you will also customize everything in the team, ranging from its nickname that will be used for in-game commentary to its unique look that can be picked from Clun Crests, Stadium Dressings and Banner choose from.

It also has authentic and custom kits for players to use for their teams, including designs from personalities in the world of fashion and music.

Not only that, they can also customize their crowd chants and club anthem as well as goal music, pyrotechnic displays, and other celebratory displays that, according to the game's website, will "bring the heat" to their home turf.

Ultimate Team also has Co-op mode by which players can do coop play with their friends through their different game mode such as the "Squad Battles," "Division Rivals," and "Friendlies."

How to Look at Loot Packs with 'Preview Packs'

The "Preview Packs" is part of the FIFA 21's "Festival of FUTball" campaign in celebration of the ongoing UEFA Euro 2020 soccer tournament, which started last June 11th.

According to Polygon, these preview packs can be seen in the FUT Shop, where all packs will have a button that has an eye icon. You can click this button to trigger the preview the contents of the pack that you wanted to buy. This will expose the contents as of you actually bought the pack and opened it.

According to NME.com, you can either skip the pack opening animation or not once you are in the preview screen.

Each preview will run under a specific time so you will have a plenty of time to look for its contents. Once the timer expires, the pack will be gone and you will able to preview another pack.

Once you seen the packs that you want to buy, you can either buy them with either the free in-game currency, FUT Coins, or the premium FUT Points.

TAG FIFA 21
© 2020 Game & Guide All rights reserved. Do not reproduce without permission.