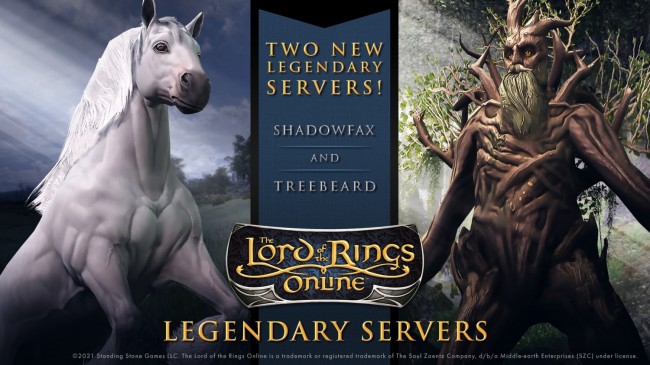 (Photo: Photo From Lord of the Rings Online's Website)

Standing Stone Games has announced that they will launch two new legendary servers for their The Lord of the Rings Online.

According to ComingSoon.net, these two new servers, namely Shadowfax and Treebeard, will feature different gameplay mechanics for the fans of the massive multiplayer online role-playing game (MMORPG).

These servers will also come with the new Landscape Difficulty option, which is only available to the two new servers.

If you've picked, which one? Or, both? You can read more about our new Shadowfax and Treebeard worlds at https://t.co/V8vaUvwFGG! #LOTRO pic.twitter.com/6D5QrnoX90

As mentioned, both the new servers will provide a different style of gameplay and how will the players enjoy the journey with the Lord of the Rings Online.

READ ALSO: Top 5 Lord Of The Rings Video Games Retrospective: Get Ready For 'Shadow Of Mordor' With A Look Back At The Best Titles

The Shadowfax Server will be as fast as its namesake - the iconic silvery-white Middle-earth horse that Theoden, the 17th king of Rohan, gave to Gandalf the White.

According to the Gamespot, the server itself will allow its players to grind faster with its +50% XP Boost as an additional Legendary Item and Mount XP, and +20% virtue XP. Unlocks within this server will happen more quickly than normal, which players need to wait for two months.

On the other hand, players inside the Treebeard Server will take it slow as its namesake - the slow and deliberate elderly Ent.

In the server, players will enjoy the slow paced mechanics that will give them time to enjoy the game more, while they will experience a more difficult journey, according to ComingSoon.com, and a -60% reduce XP gain. Unlocks will be less frequent and will last every five or six months.

According to the FAQs posted in their webpage, Standing Stone Games said that the Legendary servers will be different from the standard ones.

While the players of the Standard servers can reach a maximum level cap with no restrictions and will go on to the game's adventure story beyond the destruction of the One Ring, players inside the Legendary server will start with the initial level 50 and below content while focusing on the Shadows of Angmar story.

In those Legendary servers, the level cap as well as the story content will unlock over time as they progress within the game, allowing the players to enjoy the early in-game story anew.

The developers of the game also said that Legendary Server will only be available to the game's VIP and Lifetime VIP Subscribers.

Aside from the two new Legendary Servers, Lord of the Rings Online players will also experience the new Landscape Difficulty option. According to Gamespot, this will allows players to choose the difficulty that they want to experience within the game.

Bleeding Cool said that they will choose either Dangerous, Deadly, Deadly +1 up to +6, Hard, and Normal. As they increase the difficulty, the challenges of enemies they will face on the landscape will also increase, but they will be rewarded with an XP and Virtue XP boosts.

All Deadly difficulties will have "Eye of Sauron" effects, where random debuffs where casted on the players for the next minute.

According to the game's webpage post, the difficulty level can also be changed again at any time by speaking again to the NPC Berthadan.

Players must activate the desired difficulty prior to reaching Level 11 while maintaining said difficulty or higher until they earn the title.

TAG Lord of the Rings Online
© 2020 Game & Guide All rights reserved. Do not reproduce without permission.