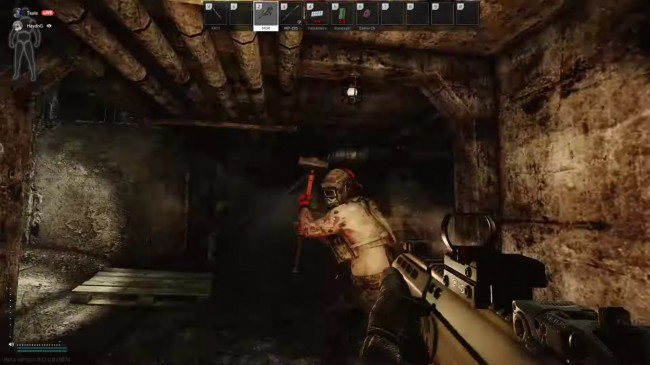 Escape from Tarkov's Patch 12.11 Update gives its players en even more hard time as it will debut a new Scav boss, Tagilla, who wields a sledgehammer to give them broken bones and an instant kill.
(Photo: Screenshot from Teale's "Escape from Tarkov - Factory Scav boss is horrifying! Tagilla first look.")

Battleslate Games has released the full Patch 12.11 Update for Escape from Tarkov. This update will provide new features for the game as well as several fixes that will implemented.

The said patch update will introduce a new expansion for a map in the game that will lead to the discovery of a new boss and several other additions towards its gameplay.

Aside from the several gameplay add-ons, an inventory wipe was implemented during the said patch update. According to the Gamespot, the said wipe was normal in the game as it is done twice a year, with one made in December of last year.

We are glad to announce the release of patch 0.12.11 for #EscapefromTarkov

Please report any found bugs via the launcher by pressing the "Report bug" button pic.twitter.com/dIEllR00lr

The inventory wipe includes deactivating of secure containers, which players are using to keep any important items and equipment between runs, as well as hefty discounts at the game's vendors.

The biggest addition in Escape from Tarkov during the Patch 12.11 Update is the expansion of its Factory map which will be suitable to the new Scav Boss that will be lingering in the said location.

According to TechRaptor.net, the new boss, Tagilla, who is the brother of Killa, the boss in the Interchange map, chooses the Factory as his refuge. He can set ambushes, open suppressive fire, and breach if needed.

In combat, he wears a helmet and carries an RPK-16 5.45x39 drum-fed light machine gun just like his brother, but a spot-on difference aside from him fighting players top-naked, he wields a sledgehammer, which he uses to disorient his enemies or give them broken bones or an instant kill.

According FutureGameReleases.com, the patch update also fixed some few issues in Tagilla, including him not getting stuck in an object collision on Factory and several minor fixes.

Aside from these additions, a first iteration of weapon malfunctions and technical deterioration was also implemented in the game.

According to the blog post in their website, almost every gun in the game, including everyone's favorite Kalashnikov, can now misfire, which can be resolved in different ways, not just via the "Resolve" hotkey, but also by any other related manipulations.

The technical condition of the guns and their deterioration from firing were worked, as well as certain ammunition and weapons mods will affect its speed. Different ammo now has increased or decreased chances of misfires.

If misfiring was not resolved, it will influence the gun's base accuracy, its offset of the center point of impact and general misfire chance.

Another addition in the game is the Fence Reputation, which according to Gamespot, can affect a number of different mechanics. According to the game's patch notes, players can lose reputation by killing non-hostile scavs, while being friendly to scavs and scav bosses can gain one.

Fence Reputation can affect several in-game factors including players communicating with AI-scavs to agree working with them, Player-scav cooldown, car extract fee, prices when selling items to Fence, and the ability to purchase uninsured items lost by other players by reaching Fence's max loyalty level.

Several bug fixes implemented to Escape from Tarkov during Patch 12.11 Update included fixing the issue where players can't spawn even after successful matching and going back to the main menu, a bug where players hung on a blank screen after pressing the "Back" Button on the treatment screen after a raid, and more.

Other bug fixes in the game according to FutureGameReleases.com are fixes to the issue where a small amount of Scav extracts are available, Fence's reputation did not decrese when killing Raiders as a Scav, and adjusting the prone movement in bushes.