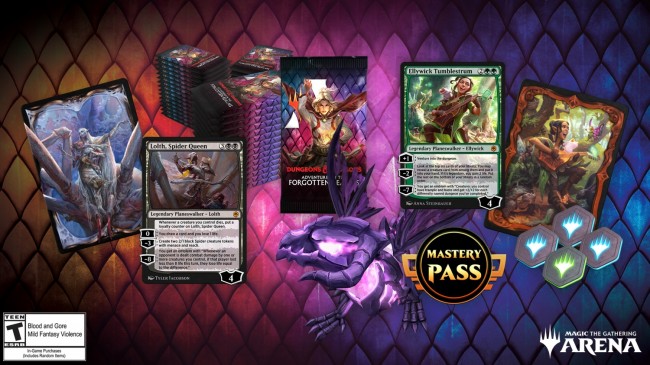 Players of Magic: The Gathering Arena can have these goodies during the " Adventures in the Forgotten Realms" Event.
(Photo: Photo from MTG Arena's Twitter Page, @MTG_Arena)

The said patch update will launch the "Adventures in Forgotten Realms" expansion, bringing in new content to the online collectible card game, as well as several gameplay improvements, and fixes regarding cross-platforming.

The "Adventure in the Forgotten Realms" Event

In celebration of the "Adventure in the Forgotten Realms," according to Dot Esports, the patch will give a lot of cosmetics, including a sticker bundle and card sleeves, Dungeon and Dragons-inspired card styles, and extended art.

The epic Magic and D&D crossover set is available today on @MTG_Arena! Let's celebrate the arrival of Adventures in the Forgotten Realms with a little team building activity. #MTGDND

READ ALSO: 'DnD: Dark Alliance' Crossplay on PC, PS4, Xbox Guide Plus Beginner's Tips on How to Master the Game

They can also purchase the Beholder Bundle, which has the Beholder pet and a Xanathar, Guild Kingpin card sleeve, for 3,000 gems or 15,000 gold, and the event-only Borderless Planeswalker bundle, which contains a total of five different card styles, for 1,600 gems or 8,000 gold.

As for the launch events, Dual Shockers has the following schedules: July 8th until Innistrad: Midnight Hunt release, both the Premier and Traditional Drafts for Adventure in the Forgotten Realms will be launched.

On the other hand, from July 8th to July 31st, both the Sealed and Traditional Sealed for Adventure in the Forgotten Realms will be launched.

Players can also test out post-rotation builds within the Standard 2022, as well as the sets that are only available for the said format.

Also in the patch update, several gameplay improvements were made, which includes an improved hanger displays for the tokens, dungeons, and other related cards. Which means you can easily see cards that has more than one token or dungeon, while it will give you time to read through a dungeon without cycling.

Other improvements that was in the game's patch notes which was posted in Wizards of the Coast's website includes the addition of the Cancel Blocks button, tweaking of highlights on permanents with mana abilities, changes in the quantity indicator on card stacks, and adjusting mana highlighting in the mana pool.

Finally, in terms of cross-platforming, the horizontal deckbuilder can now be accessible to any mobile smartphones and has an improved user interface, which is evident in adding and removing of cards in the deckbuilder.

For other information regarding Adventure in the Forgotten Realms, you may visit the patch notes in the Wizards of the Coast's website.