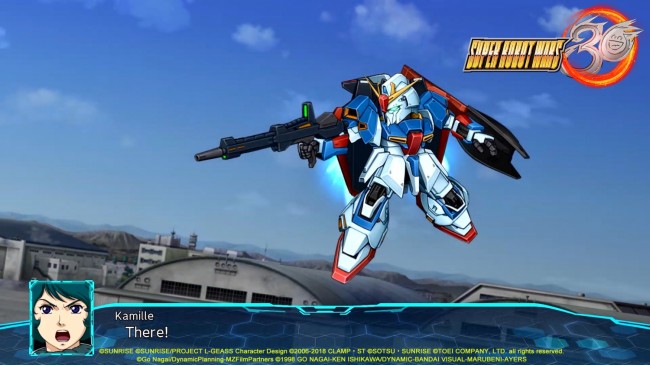 The Zeta Gundam, piloted by Kamille Bidan, is one of the mecha units that will be part of the Super Robot Wars 30 roster.
(Photo: Photo from the Bandai Namco Entertainment Website)

In celebration of its 30th Anniversary, the simulation role playing game (RPG) promises an even more larger line-up than its predecessors.

What is Inside Super Robot Wars 30

With a total of 22 Mecha anime titles entering the fray, Super Robot Wars 30 will might be the biggest in the series history.

Destiny has spoken.
A ruthless system seals the earth. Obey or be damned.

Super Robot Wars 30 will be officially launched on 28 October 2021 for Nintendo Switch, PlayStation 4 and STEAM in Southeast Asia!: https://t.co/2VJOjy7bGK#SRW #SRW30

According to Gematsu, six new titles will be included in the roster, including the famous SSSS. GRIDMAN, which based on Tsuburaya Productions' Gridman the Hyper Agent. Also in the roster Is Brave Police J-Decker, a 1994 Mecha anime released as part of the Brave series.

On the other hand, the mecha from both Code Geass: Lelouch of the Rebellion III - Glorification and Mazinkaiser Infinitism will only appear in the game to be used by the characters from their respective series who is present in the game's anime line-up.

Of course, a Super Robot Wars roster would not be completed without the characters and mecha from the Mobile Suit Gundam franchise.

The said mecha, according to Dual Shockers, was designed by the famous mecha designer Katoki Hajime, and was seen with a prominently large three X's in its head covering the eyes.

The Huckebien 30 will be piloted by Edge Seincarus and Az Seincarus, both new to the game and was voiced by Sugita Tomokazu and Aizawa Mai respectively.

Super Robot Wars 30 also introduces its villain, Karleum Vauru, who is voiced by Nakamura Yuichi. The said character will pilot the Gravalin, which is designed by Obari Masami, another prolific mecha designer.

Super Robot Wars 30 is expected to be released on October 28th in Japan and Asia for PlayStation 4, Nintendo Switch, and PC through Steam. The said game will be Japanese dubbed with English Subtitles. As for its Western release, there are no further announcements regarding it as of now.

According to Nintendo Life, the Standard Edition of the game will cost 8,600 yen in Japan, while the Digital Deluxe Edition will cost 16,500 yen, and the "Super Limited Edition Edition" physical bundle.

The said Season Pass includes 2 DLC packs, an Early Access to said DLC packs, and two Special Missions, while the Bonus Mission Pack contains 15 side missions, all of which will give the player a large sum of rewards once they are completed.

Players who will purchase the physical version of the game early and pre-ordered its digital version will receive an SRX unit, a Cybaster unit, a Special Starter Pack with 30 ID Power Part, 50,000 credits, 500 PP, and 3,000 MxP, and three bonus missions.

Those who avail the digital version pre-orders will also receive a bonus enhancement pack, consisting of a Power Part, 50,000 credits, 500 PP, and 3,000 MxP.