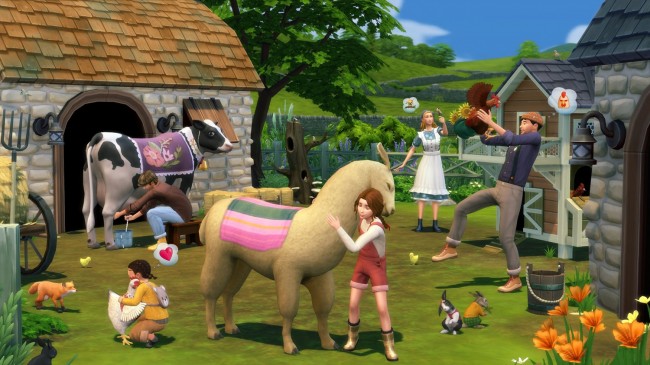 It is time to get away with the noisy city life and going back to basics of living as The Sims 4 will release its newest expansion pack, "Cottage Living."

Unlike the game's other expansion packs, which flashy lights, energetic sounds, and other lively gimmicks, "Cottage Living" will offer the game's players a simple yet straightforward rural life-esque content that players would love.

What is Inside "Cottage Living"

The "Cottage Living" Expansion Pack will pull the players of The Sims 4 back to the rural countryside life. According to Extra Time Media, the said Expansion Pack let them explore the countryside charm of Henford-on-Bagley, a fictional English village that is a perfect location for players to live their cottage dream.

The early bird gets the gnome & the bike & the decorative tree! 🐓🚲🌳🤩 Grab the #Sims4CottageLiving by Sept 2 to unlock the Gnome on the Go Digital Content*! ✨ https://t.co/l4dpoIa878

*This content will become available once the pack launches on July 22! pic.twitter.com/bTvGDJY9ji

The said English village had a lot of places that players can explore and discover. According to PC Games N, Old New Henford is a great place for them to discover new farm animals, while Bramblewood let them forage for various berries, and Finchwick is the place where locals get together to host competitions.

Living in Henford-on-Bagley is rather expensive, said Techradar in their review regarding the expansion pack, however once a player bought a cottage in the village, which all of them are a faithful recreation of those English countryside homes, it will be rewarding because it will make them feel at home.

There are plenty of other cottage building options if they do not want the pre-build English house the game provided. They can choose from pebbledash walls to thatched roofs to other elements that they can use to build that English countryside cottage that they have imagined.

Aside from own a cottage, the said Expansion Pack for The Sims 4 will also give the players the opportunity of befriending animals in the area such as wild rabbits, foxes, and birds. According to Eurogamer, they can also raise their own in their farm, including llamas, chickens, and cows.

Once raised, these farm animals will produce wool, eggs, and milk, all of which can be used on their journey to self-sufficiency.

They can also grow fresh ingredients if they are willing to get their hands properly dirty. They can plant, and produce, watermelons, eggplants, pumpkins, mushroom, and lettuce, all of which can be used in new cooking recipes.

Finally, players can visit the rural pub, The Gnome's Arms, along with a convenient grocery stall, and the Crumplebottoms' garden booth if players want some advice regarding horticulture.

Those who pre-ordered the Expansion Pack before September 2nd would get the following items that is inside the "Gnome on The Go" Digital Content Pack - a Scenic Community Bicycle, an "Onward" the Adventurous Gnome, and a Bramblewood's DeLIGHTful Tree.

TAG The Sims 4
© 2020 Game & Guide All rights reserved. Do not reproduce without permission.