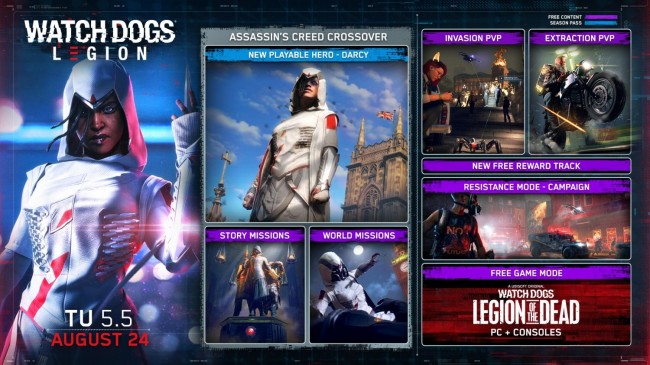 Watch Dogs: Legion's Title Update 5.5 will bring in new content, including Darcy, a new character for its crossover with the Assassin's Creed franchise.
(Photo: Photo by the Watch Dogs' Twitter Page, @watchdogsgame)

The Brotherhood has entered the cyber realm of the hackers as the Assassin's Creed series will crossover to Watch Dogs: Legion. In celebration of the said crossover, a member of the said secret organization of the Assassins will be coming in the game as its new character.

The said crossover, according to VGC, will be a part of the Legion's Title Update 5.5, which will also bring in new content in the game for players to see and experience.

The said crossover between two stealth games, according to Twinfinite, will bring in Darcy, a modern-day assassin equipped with the same Assassin speed, stealth, and arsenal, including the well-known hidden sleeve blade.

Discover Darcy, a member of the Assassin’s Brotherhood, and bring her signature hidden blade in the ultimate stealth-based Watch Dogs: Legion experience.

Free content available for all players, plus Darcy as a new playable character for Season Pass owners.

Darcy was shown in the teaser trailer video for the crossover sneaking around her targets in the modern-day London, showing off how deadly the hidden blade is to several unsuspected guards.

According to VGC, Darcy can be played either in the main game of Legions or in its multiplayer Online modes.

According to Gamespot, the addition of Darcy to the game will bring in several new locations of the Brotherthood that might have connections for the fans of the Assassin's Creed series.

However, according to Lathieeshe Thillainathan, the producer of Legions, the crossover between the two games does not mean that Watch Dogs is canonically connected to Assassin's Creed.

Instead, he said that the developers are just having fun creating a character like Darcy that is heavily inspired by the stealth game franchise.

Aside from that, the modern-day Assassin will also bring in new two story missions, as well as world missions for players to enjoy. The latter will be released for free to all Legion players once its Title Update 5.5 rolls out.

The Zombies are Coming

Another new content that will be added in Watch Dogs: Legion during its Title Update 5.5 is the full launch of a new zombie survival-based "Legion of the Dead" game mode.

The said game mode, according to VGC, was first released in Legion's PC version for alpha testing last June during the game's title Update 4.5. Ubisoft, the developers of the game, then planned to add in more players from other platforms during the preparations for its beta testing.

In a description about the said game mode, Ubisoft said that the zombies will storm in London, while Albion soldiers and Clan Kelley enforcers are hoarding important supplies in preparation of the impending wave of the undead horde.

In the Legion of the Dead, which will be an online multiplayer mode, players will use strategy and tactics to not just ensure their survival in the war against the zombies and their extraction out of London, but also in gathering and managing the aforementioned supplies and power-ups.

Darcy, along with Watch Dogs: Legion's Title Update 5.5, including the Legion of the Dead multiplayer mode, will be rolled out this August 24th.

According to Gamespot, the Watch Dogs-Assassin's Creed crossover character will be available first to those who owns Legion's Season Pass, while the other additional content will be accessible for free. This includes 2 new Player-versus-Player modes, a new free reward track, and a Resistance Mode campaign.