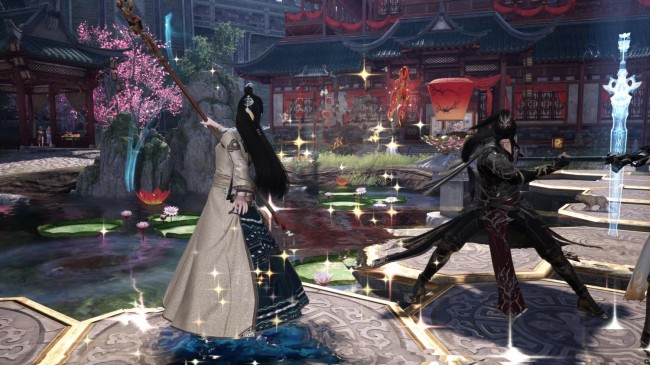 (Photo: Photo from the Swords of Legend Online's Website)

It is time to celebrate the beauty of the moon while testing their skills to an extreme level as Swords of Legends Online will have its Moon Festival event. The said event, according to MMORPG.com, will be a part of its major update, which also includes new dungeons, raids, and items.

It is also part of the game's road map that Gameforge, the developers of the multiplayer online role-playing game, revealed days ago, which also included a new Season 2 Battle Pass, new features for its player-versus-player modes, and other plans for 2022.

The said Moon Festival for the Swords of Legends Online, according to Bleeding Cool, will give its players an access to the Festival Grounds by talking to the non-playable character (NPC) Velveteen at the Blessed Dew Terraces.

With the maintenance on September 16th we’re going to release a patch featuring the Hard Mode of the Xuanjiu Jade Palace Raid, additional Extreme Dungeons and Fall Event and more!https://t.co/UW6eqRLBNthttps://t.co/Ls8VgNfYcOhttps://t.co/up8JzmsFtT#solonline #gaming #mmorpg pic.twitter.com/xmduQScvux

This will open a portal that will transport them to the Xinghejian Island, where mini-games such as the Road to the Moon Palace and the Star Gatherer awaits them.

The former will test their memory while tracing the paths in a small area, while the latter will have them collect different colored stars, each has a corresponding point and a stackable speed buff that will last for five seconds.

Aside from these mini-games, the event will also have the Bright Light Blessing, which according to Gaming Lyfe, can be played even outside of the Festival Grounds as long as players have the Moon Offering Incense in order to buy sky Lanterns.

The Moon Festival will also giveaway new avatars, emojis, and photo filters for players who participated.

Aside from the event, Swords of Legends Online will also receive two Dungeons that were set to Extreme difficulty.

According to the patch notes posted by the developers in the game's website, the Frostbitten Patch in Weichuan Highlands, the Chou Prison in the District of Jiangdu, and the Raging River Ruins in Shanghuai Grasslands will be available in said difficulty, along with the previously released Yemo City in Wuzhao and the Nightmare Temple of Mercy.

The drops per boss in these Extreme mode dungeons will be limited per week, and will reset on Sundays at 6:00 AM server time.

Players may also join the Xuanjiu Jade Palace Hard Mode Raids, where players of 10 to 20 will march deep within the Zhongnan Foothills and below the Nine Dragon Waterfall to face the new challenge.

Players who will clear this Raid will receive a Level 90 gear, player-versus-environment (PvE) Sealstones III, weapon and bracer talisman II Recipes, and more. These can be received per boss per week, and it will reset on Thursdays at 6:00 AM Server Time

In order to enter the said Raid, they need to have item or items that are Level 75 equipped to their characters, and they can only enter manually, which means there are no automatic matchmaking available in the Raid.

Meanwhile, to implement said additions, and several changes and fixes, Swords of Legend Online will have its scheduled server maintenance.

TAG Swords of Legend Online
© 2020 Game & Guide All rights reserved. Do not reproduce without permission.