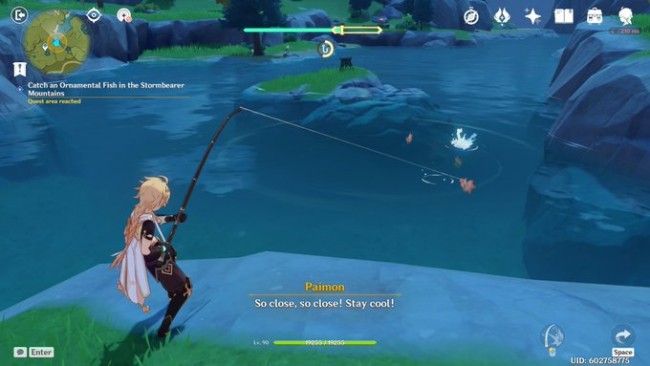 Aside from the new heroes like the Raiden Shogun, Kujou Sara, and Aloy, as well as two new islands in the archipelago of Inazuma in the form of Seirai and Watasumi islands, Genshin Impact's Version 2.1 added an interesting gameplay mechanic to keep their players busy during their free time - fishing.

Every video game has fishing in either its mechanic or part of their minigames, from the Pokemon series to Animal Crossing: New Horizons to the Yakuza series to The Legend of Zelda: Ocarina of Time, and Genshin Impact is no different.

In miHoYo's take to the said mechanic for their online multiplayer role-playing game (RPG), according to Ginx, players can catch fishes that they want to eat, collect, and decorate in their Serenitea Pot. They can also catch fishes to exchange them for rewards at the Inazuma Fishing Association.

Time to Be Patient

In real-life fishing, one must be patient. Same goes with players who want to experience fishing in Genshin Impact.

READ ALSO: 'Genshin Impact' The Palace in the Pool Puzzle Guide: How to Unlock this Domain

In order to practice their patience in the said mechanic, they must understand the fishes' respawn time, from how long to when they will respawn, as well as when will be the best time to fish.

According to HITC, the best times to catch a fish in the game is between from 6:00 AM to 6:00 PM and from 6:00 PM to 6:00 AM, all are in server time. This means that players can fish any kind of fish for those specific time frames, however it becomes complicated when it comes to waiting for them to respawn.

There are varying reports on how long the fishes will respawn. According to Twinfinite, the fishes in Genshin Impact tend to respawn in a fishing spot during its daily reset. This means that players will wait for 24 hours for the said fishes to come back to that same spot.

But there is a simple shortcut in order to speed things up. According to Twinfinite, players can force the fishes to respawn by changing the in-game clock.

To do this, they first need to go to Paimon Menu and go to the Side Bar. From there, they must look for the Time tab and click it. Afterwards, they will see a clock with different times of the day.

In order to change the in-game time, they need to more the big hand of the clock to the time of the day that they want. Once they are okay with the changes, they will Confirm it.

As mentioned earlier, the fishing mechanic for Genshin Impact will allow its players to catch fish in exchange for items. This includes The Catch, a 4-Star polearm weapon that has 510 Base ATK and 45.9% Energy Recharge once it hits Level 90.

In order to have this weapon, players need to catch a number or Raimei Angelfish, a fish that swims in the waters that were suffused with Electro.

To catch this fish, according to Ginx, they must go to the shipwreck, which is south of the Kujou Encampment on Kannazuka Island, at 6:00 PM to 6:00 AM server time. After they defeat the enemies within the area, they will start catching the said angelfish.

They must use the False Worm bait to attract the fishes. The said bait can be created using a Slime Condensate and a Berry. They must catch six Raimei Angelfish in order to unlock The Catch.

Aside from the Raimei Angelfish, they also need to catch a number of Golden Koi and Rusty Koi before unlocking said weapon. In order to catch them, according to vg247.com, they must go to Liyue.

There are three spots to catch the koi fishes - one is in the Lihua Pool, one that is at a pathway between the Mingyun Village and the Guili Plains, and one that is at the left side of the Wangshu Inn. They must visit the places from 6:00 PM to 6:00 AM server time.

They must catch 20 of each Golden Koi and Rusty Koi. Once they got the fishes required, they need to go to the Inazuma Fishing Association office to exchange them for the said polearm weapon.