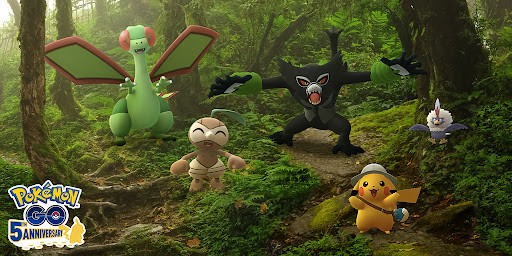 In celebration of the release of Pokemon the Movie: Secrets of the Jungle, Niantic announced that Pokemon Go will have a collaboration with the said animated movie to initiate an in-game event of the same name.

The said event will feature Zarude, the Dark/Grass Mythical Rogue Monkey Pokemon, who was first debuted in Pokemon Sword & Shield, as well as the return of the misfortunate Team Rocket duo of Jesse and James.

Aside from those arrivals, the Secrets of the Jungle event will also bring in additional in-game content for players to experience, including new sets of Raids and a Field Research.

Get ready for adventure, Trainers! In celebration of the global release of Pokémon the Movie: Secrets of the Jungle on Netflix, you can enjoy an event featuring Special Research that’ll lead to an encounter with the Mythical Pokémon Zarude. https://t.co/6x9bpkk6t9 pic.twitter.com/iMYDBOhTa6

Explore the "Secrets of the Jungle"

As mentioned earlier, Zarude will be featured as players will have the opportunity to encounter and catch the Galarian Mythical Pokemon during the event. In order to do so, according to Future Game Releases, they will need to grab the event-exclusive limited-time Special Research story.

Completing the said Special Research will award them an encounter with the said Pokemon, as well as other rewards like PokeBalls, Stardust, and XP.

The said Special Research, according to Gamepur, will be available from October 1st, at 10:00 AM local time to October 10th at 8:00 PM local time, and Trainers can accomplish this anytime during the event period.

Aside from the said encounter with the Mythic Pokemon, they will also encounter other Pokemon that were seen in Secrets of the Jungle movie, including Hoothoot, Combee, Drilbur, Cottonee, Dwebble, and Larvitar.

The Explorer Pikachu will also appear in the wild during the event as they will also encounter it, or a Shiny version, if they are lucky, in the wild.

Aside from these encounters, the Secrets of the Jungle event will also bring in Raids in Pokemon Go. According to Bleeding Cool, the aforementioned Explorer Pikachu will be in the 1-Star Raids, alongside Larvitar, Roggenrola, Foongus, and Rufflet. Lickitung will be appearing in the event's 3-Star Raids, alongside Chansey, Pinsir, Ludicolo, and Flygon.

If they want to add more Pokemon that they will be encountering during the event, a Field Research will be available at PokeStops.

Completing said Field Research, according to Nintendo Wire, will award them encounter with Audino, Rufflet, along with its Shine counterpart if they are lucky enough, and other Pokemon, as well as other in-game items.

The event will also bring back the Jesse and James as they return to the game to continue their mischief from last year. According to a post in the game's website, Trainers need to look out for the Meowth Baloon, as they will appear riding on it until October 15th, at 10:00 AM local time. This means that

Finally, Pokemon Go's in-game Style Shop will give away free avatar items during the event, including a free Adventure Hat and a Wailmer Water Bottle.

Pokemon the Movie: Secrets of the Jungle will be released in Netflix of October 8th