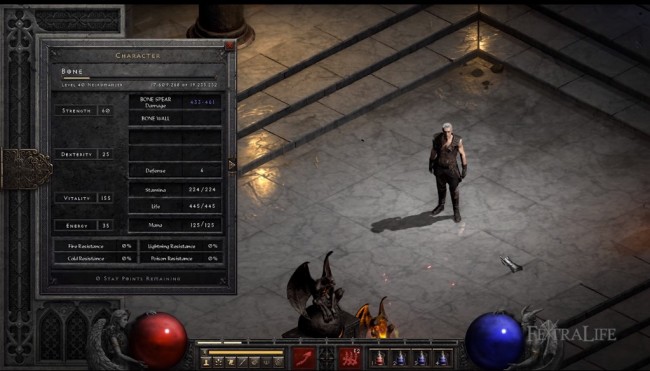 In Diablo 2: Resurrected, players have the freedom to choose a class that is suitable to their gameplay style, whether they want their character to focus on strength to dish out more damage, agility to swiftly kill their opponents, and magic to cast arcane spells.

One of said classes is the Necromancer, a who can tap the power of the Underworld to bring back the undead to fight for their battles, while casting spells that could either damage them or give them a negative buff.

One of the most common builds for the Necromancer in the game is for its Summoner route. This route will focus more on the aforementioned ability to call the army of the undead.

Diablo 2 Resurrected on the #switch plays pretty well I have to say! Back to the nostalgic days of playing Necromancer #Diablo2Resurrected #nintendo pic.twitter.com/GiDwuOoGcm

According to The West News, players who choose this route can cast Raise Skeleton to summon armor-clad skeletal warriors to fight against their foes, while summoning a Clay Golem will allow them to have an even more powerful ally on their side, as well as a wall against opposing attacks.

READ ALSO: 'Diablo 2 Resurrected' Low Level Runewords Guide: Where to Get Runes, How to Make them, What to Use for Level 20 and Below

For this build, according to DBLTap, players must heavily invest on their skeleton minions who will doing most of the damage.

Aside from that, they can also use the Corpse Explosion spell, which they can make a corpse, once killed by their minions, explode, dealing high amounts of burst damage to unsuspected enemies in the area.

Players must max out the stats of both the aforementioned spells, as well as the Skeleton Mastery, which can permanently increase a skeleton warrior's life and damage, up to 20, while for the Clay Golem spell, as well as the Revive spell and Golem Mastery, they can increase their stats up to 10 for the first two, and 8 for the Golem Mastery.

Another spell that they can use for this build is the Decrepify spell, which according to PCGamesN, can curse enemies, slowing them down in the process while increasing the amount of damage that they will receive.

As for its equipment, according to Gamertweak, players must equip their Summoner Necromancer with the Harlequin Crest Shako for its Helm, Enigma for the Armor, Trang-Oul's Claws for the Gloves, Arachnid Mesh for the Belt, either Marrowalk or Sandstorm Trek for the Boots, either Homunculus or Boneflame for the Shield, Mara's Kaleidoscope for the Amulet, and Stone of Jordan, Raven Frost and Bul-Kathos' Wedding Band for the Rings.

Other Builds for the Necromancer

Aside from the Summoner route, players can also choose other build routes for their Necromancer in Diablo 2: Resurrected.

According to The West News, the Novamancer route can make the Necromancer attack with poison-based spells like the Poison Dagger, which can add close-range attacks with poison, while its Poison Explosion will turn any corpse into poison bombs.

They can also cast Lower Resist, which can lower the resistance of an enemy target, and can be in tandem with Poison Nova, a spell that can emit an expanding ring of concentrated poison.

They can also pick the Daggermancer route if they want their Necromancer to focus more on physical close-range attacks while also inflicting poison-based damage to their enemies, and still summon minions like Golems or Clay Golems.

For this build, however, they need to enhance their resistance and attack stats, as well as damage. They can also tap in the aforementioned spells from the Novamancer route like the Poison Explosion and the Poison Nova.

On the other hand, the Bonemancer route, according to Gamertweak, will focus more on bone-related spells, including the Bone Spear spell, which will encircle and pierce their opponents.

Its Bone Prison and Bone Wall spells are perfect for those situations where they need to caught their enemies off-guard, slowing them down in the process.

The said build is well-suited for player-versus-player (PvP) environments as its spells can stop an opponent playing for escaping the battlefield, making them easier targets of attacks