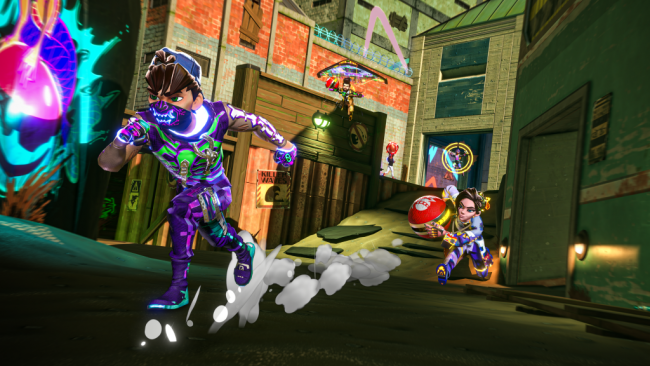 Velan Studios announced that Knockout City will enter its Season 3. The said new season, entitled "H@cked," will bring in new content to the online dodgeball brawler game, including a new battle pass system, map, and other additional in-game content.

According to a post in Electronic Arts' website, "H@cked" will focus on a mysterious person called Z3RO, whose reason why it is in Knockout City remains unknown, but from the looks of it, the said individual is looking for a fight.

One of the new in-game content that will be added in Knockout City for H@cked is the new map named Lockdown Throwdown. The said map, according to Comicbook, is an abandoned prison yard where players need to look out for the Spotlight Drones and Security Turrets.

Once they are caught by the former, the latter will pin them down with a Cage Ball. If they are quick enough, players may evade them and catch it in order to use to it to the opposing player. This new element will add new layers of strategy for the players in the game.

They will also have the opportunity to earn a Holobux by learning more about the map through the Radio Bot. The said item will help those who interested in earning rewards in the paid version of the game's Brawl Pass.

The said new battle pass system, which will be introduced in the new season of Knockout City according to Eurogamer, will offer 100 progression tier levels filled with unique rewards.

They can level up their respective Battle Passes by finishing matches and earn XP, as well as completing the Brawl Pass Contracts.

According to the developers, six new Brawl Pass Contracts, which will be split into three Free Contracts and three Premium Contracts, will be released every week, and completing them will award players new in-game items like Cosmetics, Crew Vehicles, Energy Drinks, Style Chips, Holobux, and more.

A seventh Contract will be unlocked as well and it will last for the entire season. This Contract, once cleared, will award the holders higher amounts of XP that can be helpful in their Brawl Pass.

Much like any other battle passes, Knockout City's Brawl Pass will have a free version and the aforementioned paid version, which costs 950 Holobux. The only difference is that the former will award its holder a reward after every five levels, while the latter will grant them a unique one at every single level.

Knockout City's Season 3 - H@cked, according to Gamesradar, is set to rolled out this coming October 5th across Nintendo Switch, PlayStation 4, Playstation 5, Xbox One, Xbox Series X|S, and PC.

Aside from the new map and the Brawl Pass, the game's League Play will have a rework for the said season, implementing changes such as Skill Rating overhauls and the swap in Team Elimination for Team KO.

Motorcycles will also be included in the game's Crew Vehicles, which players can also customize, as well as the brand new Crew Horn, a unique item for the Crew to let the others know about their presence.

New dark tech noir-inspired Outfits, Gloves, Faces, Hairstyles, and other forms of in-game cosmetics will also be available in the game, as well as the new set of player voices that they can choose for their own character.

Finally, a new Potato Punch energy Drink will also be available in Knockout City once the new season rolls out. The said consumable will give players an additional 500% XP for every KO finish with undercharged shots.