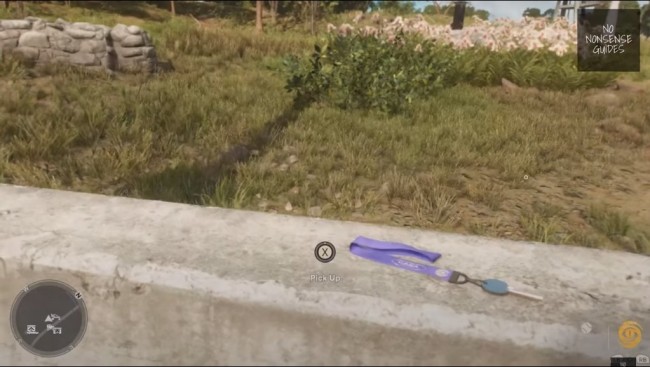 Several players of Far Cry 6 often see a key, such as the one seen here, on top of a concrete barrier in the Checkpoint area in the Aguda Cliffs in Costa del Mar, while other reported that they did not see any due to a bug.
(Photo: Screenshot from No-Nonsense Guides' "Far Cry 6 Aguda Cliffs Checkpoint Key Location")

In Far Cry 6, players must topple down the dictatorship of Anton Castillo and fight against his army, the Fuerzas Nacionales de Defensa (FND), in order to liberate the whole country of Yara.

But in order to make their revolution and rebellion to make the country free from Castillo's iron hand rule successful, they must first liberate several areas first by removing the Checkpoints that was scattered across the map.

These Checkpoints can also hold lots of loot, including FND crates that are full of important items like gunpowder, Super-Bond, or a piece of item gear or weapon.

@UbisoftSupport this issue has probably been reported already, but in Far Cry 6, the Aguda Cliffs Checkpoint in Costa del Mar doesn’t spawn in correctly. Please pass along to Ubi Toronto so they can fix it with an update :)

How to Get the Checkpoint Key in Aguda Cliffs

One of the Checkpoints that players must liberate in Yara is the one in Aguda Cliffs. According to game8.co, the said checkpoint is located Costa del Mar, near the Paraiso Laboon, and in the road that is going to Revmira.

READ ALSO: 'Far Cry 6' Wingsuit Guide: Where to Find, How to Get Fast and Use it

In order to access the said checkpoint, according to DBLTap, players must get rid of the FND soldiers that are guarding the area. According to The Nerd Stash, they can either do it by raining bullets unto them head on, or executing them using stealth.

Either way, they must eliminate an officer that has a yellow Health bar. Once they defeat him, a key will be dropped, which can be used to access the Checkpoint itself.

Once they eliminated all of the guards within the area, they can destroy the large billboard of Castillo that was posted in the building, which will liberate the said area.

What if the Key is Missing

There are several reports that players cannot seem to find the key that was dropped by the officer after it was killed. According to DBLTap, a bug may cause that said disappearance. Because of this, there are other ways that they can retrieve the said key, or open the Checkpoint's door.

One of said ways, according to Ginx.TV, is to look for a set of concrete barriers within the Checkpoint area. There should be a key that is placed on top of one of them. If they did not see the said key, they can travel away from that area, and return after a few moments.

This method might force the key to respawn on the said area, however it does not have a guarantee that it will.

If this method could not work, players can manually blow up the door with the help of explosives that they possess.

They can use any type of explosives, including frag grenades, dynamites, or Supremos like the Exterminador that can shoot explosive rockets or the Furioso that can send out an explosive ring thanks to its Fuego Loco ability. They can also use launchers to forcibly open the Checkpoint's door.

Once they opened the door, they can now collect that loot inside of the Checkpoint, which includes seven pieces of Medicine and a gunpowder, which is inside of an FND crate.

READ ALSO: 'Far Cry 6' Workbench Guide: How to Use it To Upgrade Weapons + What Mods Players Can Use