'Far Cry 6' Workbench Guide: How to Use it To Upgrade Weapons + What Mods Players Can Use 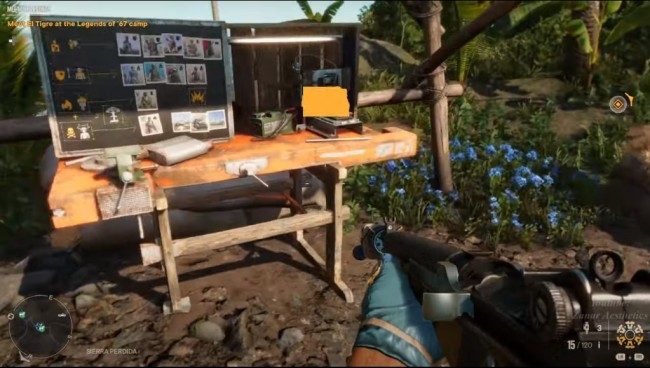 Workbenches, such as these, are an essential areas in Far Cry 6 as it can be use to upgrade weapons.
(Photo: Screenshot from Zanar Aesthetics' "FAR CRY 6 - Weapons Customization Workbench & Amigos (Animal Companions) Far Cry 2021")

In Far Cry 6, players will try to topple down the military rule of the dictator, Anton Castillo, and his Fuerzas Nacionales de Defensa (FND), and liberate the country of Yara in a rebellion.

One of the items that will aide them in said uprising is the weapons, and in order to make them more efficient, as well as more powerful, they must upgrade it, along with its other components like their ammunitions.

Luckily, Workbenches exist in the game. These areas, according to Polygon, can upgrade their arsenal, as well as craft weapon mods using resources that they find in the island such as gunpowder.

Far Cry 6: How to Use The WorkBench #FarCry6 #Guidehttps://t.co/BEye02CwN7 pic.twitter.com/9rVimkcapq

Where, How to Use the Workbench for Weapons

Workbenches, according to Gamepur, are scattered across the island of Yara and can be seen either in the hideouts or in the Guerilla camp.

READ ALSO: 'Far Cry 6' Gunpowder Guide: Where to Find and How to Use Them ALL

Once they met Juan Cortez, he will teach them how to use them. Afterwards, they can now have access for those workbenches, which are usually recognize by their black and white screwdriver and wrench symbol.

In order to use the workbenches to upgrade their items, including weapons, according to an article in Ubisoft's website, players must choose Use Workbench after approaching them. Then, they will select the type of gear that they want to upgrade, then pick an item in their inventory that they to modify.

They cannot upgrade any unique weapons that they acquired as they progress in the game.

They can also overclock their weapons in the same workbenches, as long as they finished the game's main campaign. Much like upgrading, they need to approach a workbench to use it, then select a weapon mod slot.

Afterwards, they need to pick an item, or a weapon in this case, that they want to modify, then select the Overclock Mod tile, then select Build to start the overclocking process.

What are the Weapon Mods

As mentioned earlier, workbenches in Far Cry 2 can also be used in creating and modifying weapon mods, additional items that can be equipped in an item's mod slots, or sockets. These mods are usually used in weapons in order to make them more potent and powerful. By creating and modifying these mods, they can also change how a weapon behaves.

According to Polygon, there are three different mod sockets in every weapon in the game - the Ammo Socket, the Muzzle Socket, and the Optical Socket.

The Ammo Socket are for Ammo Mods that will allow a weapon to shoot different kinds of ammo, each of them carries different effects.

The Standard Rounds, according to Rock Paper Shotgun, are the standard military grade ammo, while the Soft Target Rounds deliver massive damage to unarmored enemies.

The Armor Piercing Rounds are fast ammo rounds that can deal damage to armored enemies, while the Poison Rounds, although it deals low damage, can poison an enemy, damaging it over time.

The Blast Rounds can deal massive damage towards vehicles, while the Incendiary Rounds, like the Poison Rounds, can deal a small amount of damage, but can light any target, or targets, on fire, dealing damage over time.

On the other hand, the Muzzle Socket, are for the Suppressors. These mods can affect what happens after they pull the trigger as these suppressors can change how loud their weapons are when they fire, as well as how far each bullet will travel, and how likely they will overheat after they fire repeatedly.

Finally, the Optical Socket are for the Sights, which can turn their weapons into accurate close-range weapons or deadly long-range shooters. This works the most on snipers as it will offer multiple kinds of scopes that offer varying viewing ranges from different distances.

There are scopes that are worked better for long distances, while there are those that are more efficient in higher places like sniping from buildings.

TAG Far Cry 6
© 2020 Game & Guide All rights reserved. Do not reproduce without permission.