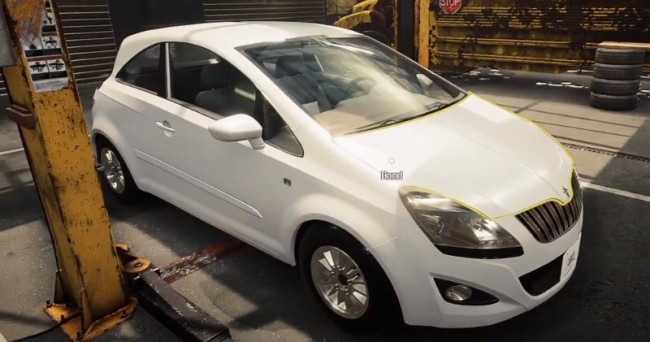 Story Order 11 - How to Restore a Royale Town

In this Story Order, players must repair a Royale Town, or in real, a 2009 Opel Corsa. According to jackcameback's Youtube video, the said car has a lot of parts that are "not discovered," except for two - its belt tensioner and its serpentine belt B.

The car also needs to have its oil changed, as well as its other fluids like the brake fluid, the coolant, the power steering fluid, and the windshield washer fluid.

Once they received the car, they will wash its exterior and interior in the Car Wash, then they will transfer it to the Car Lift in the garage. From there, they will examine the car using the Additional Tools, which they can access in the car's pie menu.

Once they examined the whole car, they must have discovered the following parts - two relays type A and B, an alternator, two medium fuses type B, a camshaft, a piston, an oil filter, a cam gear. An engine head B, a fuel rail, three spark plugs, an air filter type A, and four brake pads.

Once they know the parts that they need to repair or replace, they will the drain the car's oil using the Oil Drain machine, followed by its other fluids using the Drain Tool that they can access in the Additional Tools tab.

Then, they will repair the parts that they can still use in the Repair Table, which is located in the Workshop. From there, they will play a mini-game, where they need to hit the green tab in order to repair the said part. They must continue doing this until the part is fully repaired.

On the other hand, parts that are impossible to repair will be sold for additional Credit and Scraps, which can be used for upgrading other car parts, and buy new replacement parts instead. If they want the car's tuning percentage increase, they will buy the Performance Parts instead.

Once they have the parts, they will now reinstall them in the car, then they will refill it with new oil, brake fluid, coolant, power steering fluid, and windshield washer fluid. They can also recharge its battery, as well as repaint the car for added profit.

Once they are done repairing the car, they can do a dyno test and a test drive with it. Once they are satisfied with its performance, they can now turn over the car to its owner and receive their hard-earned Credits and XP.

READ ALSO: 'Car Mechanic Simulator 2021' Jaguar XJS Restoration Guide: How to Restore One of the Cars in the Jaguar DLC Pack [VIDEO]