'Fortnite' Chapter 2 Season 8 Cube Queen Skin Guide: How to Unlock it and Other Items 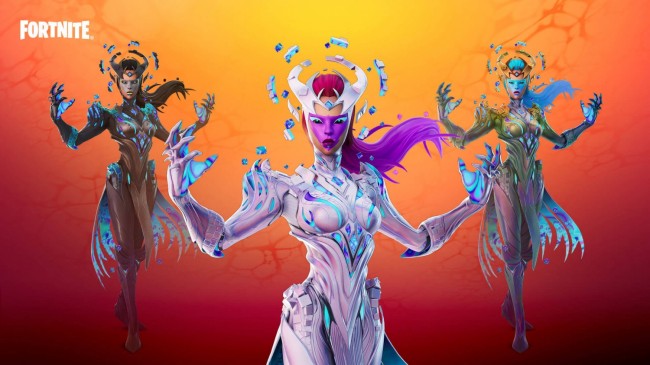 It is time to bow down to the Cube Queen as the primary villain of Fortnite's Chapter 2 Season 8 will be a special Character Skin for players to unlock. Aside from her default version, two other alternate versions of the said skin are also up for grabs.

But in order to become the bizarre monarch in the battle royale game, players must complete a set of challenges, which most of them, according to PCGamesN, will involve the weapons coming from the The Sideways.

Aside from the skin, according to PC Gamer, players the Cube Queen also brought in other cosmetics that they can also retain, including a Back Bling, an emoticon, a loading screen, a spray, and a lobby track, as well as a Pickaxe and a Glider.

She won’t stop until nothing remains.

How to Unlock the Cube Queen Skin, Other Items

As mentioned earlier, in order for players to get their hands on the Cube Queen screen, and its related in-game items, they must clear several challenges.

In order to get the Character Skin right away, players will go first to The Sideways, which can be seen in the by a large orange and pink circle, then collect a weapon that can be hidden inside a chest or a drop within the area.

Players must choose the Sideways Minigun, which they can be used in later challenges.

Once they have collected said weapon, they need to survive five circles in total, which will happen at the end of every match. Once they clear that objective, they will be rewarded with the Cube Queen Character Skin.

Afterwards, they must eliminate a player using the said weapon in order to get the Last Cube Standing emoticon.

In the third challenge, they must first join in either a Duos, Trios, or Squads match. Once they came across a downed player, they must shake them down by interacting with them, and they will eventually see a scan of any nearby enemies.

They must repeat this task one more time in order to get The Queen's Court loading screen.

For the final challenge in the first half, they must go to the crash sites, which are scattered around the game's map, in order to search for Shadow Stones. These little purple cubes, once consumed, can give the players the ability to dash around quickly.

In order to complete this challenge, they must use these Shadow Stones to hover around enemies for three seconds. Accomplishing this will reward them the Cubic Vortex Back Bling.

Clearing all of the challenges in the first half, according to Eurogamer, will reward them the Obliterator alternate skin for their Cube Queen Character Skin.

For the first challenge of the second half, they will need to visit The Sideways again, and obtain the Sideways Scythe Pickaxe. Once they got the said weapon, they need to deal a total of 150 Damage to several players in order get their own Reality Render Pickaxe.

For the second challenge, players must go to either one of the Bounty Boards that are scattered throughout the map. After they interacted it, they will eliminate any random player to complete the Bounty, and get the Regal Visage spray.

Next, they will go back to The Sideways once again to claim the Sideways Rifle. Once they get the weapon, they will need to get up to two headshots from either two different enemies or a same one, preferably a downed one in order to get the said show easier. Clearing this task will reward them the Queen's Anthem lobby track

For the last challenge, they will need to go to the large smokestacks, which is located at Steamy Sacks, then jump off the platform on the inside. This will allow them to glide into the air.

Doing this will not only reward them the Queen's Procession Glider, but also the Islandbane alternate variant for the Cube Queen Character Skin.

READ ALSO: 'Fortnite' Patch 18.30 Update Guide: When, How Long Will the Servers Down + Things Players Could Expect