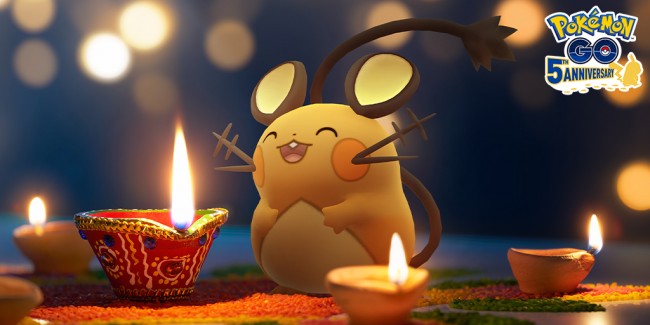 It is time for the Trainers of Pokemon Go to walk into the light as the Pokemon-based mobile game welcomes the "Festival of Lights" event. This will be the first of two events that will be happening in the game for the whole month of November.

The said event will bring in Pokemon that they will encounter both in the wild and in the Raids. This included the debut of the Electric/Fairy-type Antenna Pokemon, Dedenne, as well as other Electric-type Pokemon.

Celebrate with the Festival of Lights

As mentioned earlier, Dedenne will be appearing in Pokemon Go during its Festival of Lights event. According to a post in their website, the Pokemon from the Kalos region will be a cute addition to every Trainer's Pokedex, as well as their Pokemon team.

Lit are the skies, bright are the streets—the next path on your journey will be a little offbeat!

Get excited for another celebration in a new light, Trainers! #PokemonGOFestivalOfLights

Aside from Dedenne, other Electric-type Pokemonj will be appearing in the wild during the said event. According to NME, this includes Pikachu, Electrike, Magnemite, Tynamo, and Blitzle.

Fire-type Pokemon Slugma and Fennekin will also be in the wild during the Festival of Light, as well as Cottonee and Whismur.

If they are lucky enough, Trainers might encounter the Shiny versions of several of them, and even a rare Pokemon like Darumaka and Litwick.

Aside from those that will be appearing in the wild, several Pokemon will also appearing in Raids during the Festival of Light. For the 1-Star Raids, according to GamesRadar, Dedenne will also be appearing alongside Chinchou, Charmander, Vulpix, and Litwick.

For the 3-Star Raids, the Alolan Raichu will be appearing, as well as Electabuzz, Magmar, and Bellosom, while in the 5-Star Raids, Trainers will encounter the three of the Unova region's Swords of Justice, Cobalion, Terrakion, and Virizion, and in Mega Raids, they will be facing Mega Manetric.

Much like in the wild, they might also encounter Shiny versions of several of these Pokemon during the Raids, if they are lucky enough, while those who either caught a Cobalion, Terrakion, or Virizion will have the opportunity to taught one of them the event-exclusive move, Sacred Sword.

Those who are taking the event-exclusive Field Research Tasks will encounter Vulpix, Magnemite, Electabuzz, Magmar, Electrike, Blitzle, Darumaka, Litleo, and if they are lucky, Dedenne.

The Festival of Light event, according to Gamepur, will start this coming November 5th at 10:00 AM, local time, and it will last until November 14th at 8:00 PM, local time.

During the event, Friendship levels will increase twice at fast, as well as Trainers can open up to 45 Gifts per day. These Gifts might provide increased rewards.

New Avatar Items, including Dedenne-inspired ones, will be available in the game's shop during the event, while Dedenne stickers can be retrieved after spinning PokeStops, opening Gifts, or purchasing items from the shop.

Trainers in India will also experience the event this coming November 7th at 4:00 PM to 7:00 PM, local time. During those times, Blitzle and Dedenne will be appearing more frequently in the wild, while Trainers will receive two times the Catch Candies they will be receiving.

On the other hand, the Season of Mischief Story Event will still continue in Pokemon Go, where players will have the opportunity to catch the Mythical Pokemon Hoopa, as well as a Special Event regarding it if they complete its Special Research Tasks.