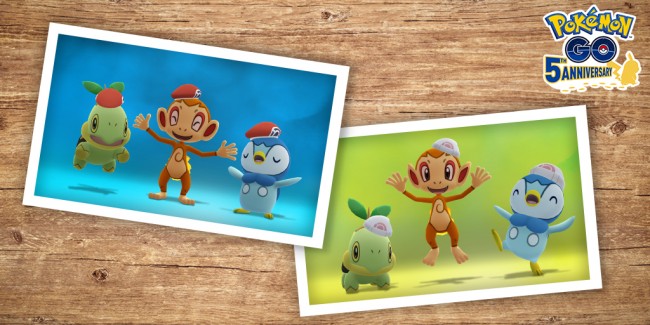 To celebrate the incoming launch of Pokemon Brilliant Diamond and Shining Pearl, Niantic announced that Pokemon Go will be having a special themed event, where its Trainers will have the opportunity to catch Pokemon that are native to Sinnoh region.

The said event will also have bonuses and exclusive in-game items for their avatars, as well as costumed Pokemon that will be on the wild within its duration.

The said event will be split into two, each has its different Pokemon line-up that will be appearing in the wild and in the Raids.

In Part 1 - Pokemon Brilliant Diamond, according to a post in the game's website, Trainers will encounter the Generation IV Starters, Turtwig, Chimchar, and Piplup, all wearing Lucas' red beret.

Aside from the aforementioned three, Seel, Murkrow, Poochyena, Aron, Bidoof, Kricketot, Buneary, and Stunky will be also appearing in the wild.

If they are lucky enough, they will not only encounter their Shiny counterparts, except for Stunky, they will also encounter Scyther, Larvitar, Plant Cloak Burmy, and Buizel, along with their Shiny versions.

On the other hand, in its Part 2 - Pokemon Shining Pearl, players will also encounter the same Generation IV Starters, but they will be wearing Dawn's white beanie. Bidoof, Kricketot, and Buneary will also be appearing in the wild.

However, unlike the event's first half, Trainers will be encountering Pinsir, Misdreavus, Houndour, and Spheal in the wild during its second half. If they are lucky enough, they might also encounter their Shiny counterparts, except Spheal, and they will also have the chance to caught Slowpoke, Bagon, Buizel, and Sandy Cloak Burmy.

The Brilliant Diamond and Shining Pearl-tie-in event, according to Gamesradar, will rolled out its Part 1 this coming November 16th at 10:00 AM, local time, and it will last until November 18th at 8:00 PM, local time.

A Collection Challenge will be also available during the event, where they will have a chance to earn 1,000 XP, 3,000 Stardust, and an encounter with Froslass once they cleared it.

New in-game items, such as the Turtwig, Chimchar, and Piplup Costumes, the Sinnoh Avatar Costume set, and stickers, will be available in the in-game shop, along with the Event Box, which contains 20 Poke Balls and a Sinnoh Stone, and the Great Box, which has three Super Incubators, two Incubator, and One Lure Module inside of it.