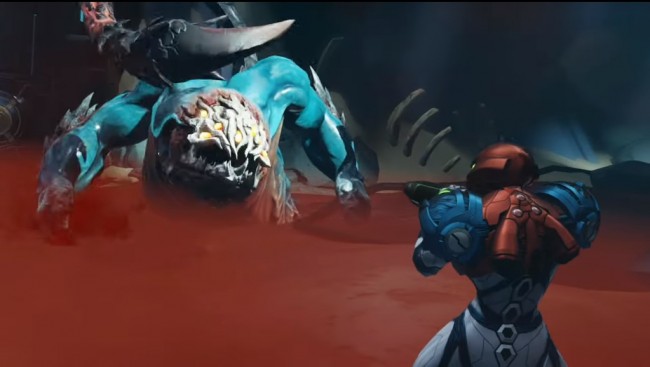 In Metroid Dread, players need to defeat a number of bosses, as well as E.M.M.I. drones, in order for Samus Aran to progress through the game.

One of those said bosses was Corpius, a long-tailed scorpion-like boss, which according to Attack of the Fanboy, they will encounter in Artaria after defeating the first drone in the area.

But in order to get ready for the encounter with the game's first boss, they must first get Samus' health and ammo for its Arm Cannon fully packed.

I struck at the right time, shot missiles into a Corpius' maw, whipped it by the tail and continued to feed it missiles.

Before encountering Corpius, players must first eliminate the organism that is guarding the door to the area, which is located at the northeastern part of Artaria.

READ ALSO: Spelunky Metroid Mod Looks Incredible, is Not Out Just Yet [Video]

In order to defeat said organism, according to GameRant, players must perform a melee attack couple of times. Then, the said organism will respond with an attack, which they can be countered by pressing the X button when prompted.

This will make Samus destroy the door, while health and ammo are dropped in order to replenish her before facing the boss in the area.

Once they face Artaria, it will dish out three attacks to the players. The first attack, according to Gamepur, is a small poison cloud that will be launched from the boss in an arc, and will stay on the ground until it disappears, so players must avoid these poison clouds.

The second one is a horizontal swipe using its tail. According to SegmentNext, players must dodge this move by simply jumping and running around the area, while not trying to attack it as it will bounce back any attacks.

The third one will make Corpius go to the rear back and stab its tail into the ground. Much like the second attack, players must keep their distance in order to avoid getting hit.

Once they kept their distance after the said attacks, they must target its face and shoot it with either their normal Arm Cannon attack, a Missile attack or Charge Beam shots.

After dealing enough damage, a brief cutscene will be played. Later, Corpius will become invisible, but then, its tail gets lit. Players must now focus their attacks on the said tail.

They can either use their Normal Arm Cannon attacks, Charged Beam attacks, or missile attacks. If they want to conserve their missiles, they can use the second option.

Afterwards, Corpius' invisibility will soon drop, revealing that it is facing away from Samus. Players must run towards it, slide underneath by pressing the ZL trigger button. But they need to be careful while initiating this move as Corpius will counterattack them.

Once that happens, they need to press X to counter, then they will hold the Right Trigger button. This will trigger a combat takedown animation, along them to attack the boss with attacks while keepthemselves free from damage

Once it is on the opposite side of the area, Corpius prepares something in its throat, which will fill up with bile, and unleashes another set of attacks to Samus.

First, it will spew poisonous gas, covering the floor for few seconds. These clouds will eventually damage them once players stayed in contact with it.

To dodge this, they must jump towards the walls, and latch into blue magnetic panels. They should not stay there for too long, or it will attack them with its tail. Once its tail got stuck in the wall, they can launch a volley of fire to the its face, dealing tons of damage.

The second attack is a projectile which they can counter by shooting it out of the sky. Successfully doing so will reward them a small health and ammo refill.

Players must defeat Corpius in this phase, otherwise his attack pattern will cycle again. Once this happens, players should focus their attacks on its tail, while countering its melee attacks as they slide underneath it.

Either way, a cutscene will play afterwards, showing Corpius shaking its head and began at Samus. This indicates that the boss fight is complete, and they manage to slay it. They can now collect the Phantom Cloak from its body. This item will make Samus invisible once used.