'Unreal Engine 5' Early Access: What Games are in Development? What New Features Does it Offer? 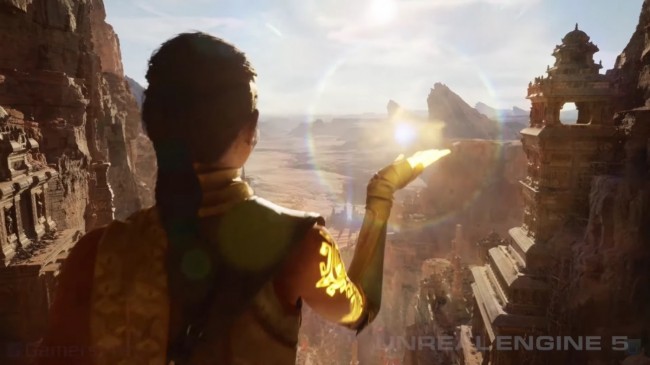 A screenshot for "Valley of the Ancient," a downloadable demo project to showcase the capabilites of the Unreal Engine 5 as it was released for early access by Epic Games last Wednesday.
(Photo: Screenshot from GamersPrey's "Unreal Engine 4 vs Unreal Engine 5 PS4 vs PS5 Tech Demos")

In a blog released to announce its early access release, Epic Games said that the latest game engine has new key features that developers should try once they have its early access build. This included new technology to create a surreal environment for their games.

One feature was "Nanite," a virtualized micropolygon geometry system which, according to the blog, lets them create games with "massive amounts of geometric detail" by importing film-quality source assets comprised of millions of polygons while maintaining a real-time frame rate as well as eliminating others tedious processes such as baking details to normal maps or manually authoring a game's level of detail models.

Another was "Lumen," a fully dynamic global illumination solution that lets developers create dynamic, believable scenes through making indirect lighting adapt to changes to direct lighting or geometery on the fly. This makes scenarios such as changing the sun's angle with the time of the day, turning a flashlight, or opening an exterior door look believable.

Find out more and go hands-on with Nanite, Lumen, and all of the exciting new tools and features: https://t.co/U47glzF20K

These, including other enhanced tools for animation, audio rendering, open world creation, and an enhanced "Unreal Editor," are all in store for game developers once they have their hands on the early access of the Unreal Engine 5. And all it needs is a Windows 10 64-bit Operating System, a 2.5 GHz or faster Quad-core Intel or AMD Processor, an 8 GB RAM Memory, and a DirectX 11 or DirectX 12-compatible Video graphics card as its system requirements.

The game features a woman named Echo in a deserted mountain area, which according to the article, was inspired by the scenery of Moab, Utah, where its development team took photos of it rock formations then scanned them before transferring its assets to the game. This process will show the capabilites of "Nanite" in terms of producing surreal environments.

Several game developers have plans to ship several of their games and projects to the Unreal Engine 5 once it is rolled out for production. Gaming developing company Ninja Theory said in an Xbox blog last June 2020 that they will building "Senua's Saga: Hellblade Ii" on the said gaming engine.

The Coalition, a video game studio that created the "Gears of War" series, have announced that they will shift their focus on next-gen game development using the said game engine.

According to the game studio's announcement, the next installment of their Gears series will might be developed under Unreal Engine 5 much like its predecessors who became part of the game engine's breakthrough since the game's 2006 release on Xbox 360.

"Gears of War has always been at the front of Unreal Engine development - as a breakout 720p title for Xbox 360 through last year's 120FPS multiplayer update for Xbox Series X|S - and we're excited to continue that tradition by developing on UE5 for multiple new projects in the coming years," The Coalition said in the announcement.

In their blog, Epic Games said that the early access of the game developing engine is not yet production-ready, yet they will be rolling out Unreal Engine 5 for full release in early 2022. When they do, they will be shipping out "Fortnite" on the said game engine.

"We are hoping to ship the full release in early 2022 with many memory, performance, and quality improvements, as well as additional new features that will benefit creators in all industries. As always, we use Unreal Engine in production before we expect you to, and we will ship Fortnite, on all its supported platforms, on Unreal Engine 5," they said.