'Pokemon Go' Espeon Weakness: How to Defeat This Eeveelution in Tier 3 Raids Fast 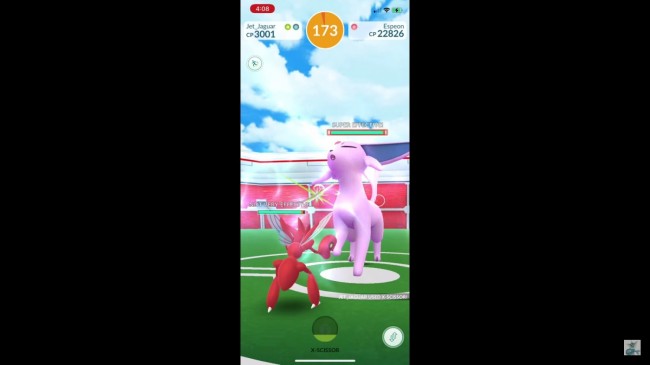 After revealing Sylveon as parts of the game's Luminous Legends Y campaign, Pokemon Go is now featuring Espeon, along with its other Eeveelutions, with the exception of the currently-released Sylveon, the Ice-type Glaceon and the Grass-type Leafeon, in its Tier Three raids.

These raids can be a good way for Trainers to attain those Eevee Candies as well as to have an opportunity to catch these Pokemon, including Espeon.

In order to take on the Espeon, and to eventually catch it, you must need to know its strengths and weaknesses. Espeon is classified as a Psychic-type Pokemon. In a chart posted by Eurogamer, Psychic-types are strong against Fighting-types and Poison-types, but weak against Steel-types, Dark-types, and fellow Psychic-types.

Stickers inspired by Eevee and its Evolutions are available now in Pokémon GO! 🎀

You can acquire Sylveon stickers from PokéStops, Gifts, and the in-game shop. Other stickers inspired by Eevee and its Evolutions will be available exclusively in the shop. pic.twitter.com/QV0fFBHkhx

They are resistant to Fighting-types and fellow Psychic-types, but vulnerable from attacks from Bug-types, Ghost-types and Dark-types.

With that in mind, your team should compose of Dark-types, Psychic-types, Ghost-types and Bug-types.

Pokebattler had a suggestion for your team components in the form of its Top 10 Espeon Counters list.

According to the list, you need to have a Mega Gengar, a Ghost/Poison-type Pokemon that uses the Shadow Claw and Shadow Ball moves that could render an Espeon into a Fainted state. A Mega Houndoom is also suitable in defeating Espeon as it has Dark-type attacks like Snarl and Foul Play.

In case you don't have these Mega Evolutions, you can face Espeon with a Weavile as part of your team. This Dark/Ice-type Pokemon can easily inflict damage to it with the help of its Snarl and Foul Play attacks.

Steel/Bug-type Pokemons such as Scizor or Genesect can have an advantage against Espeon, since Psychic-types are vulnerable against Bug-type Attacks such as Fury Cutter and X-Scissor.

You can also add Psychic-types such as Mewtwo and Alakazam, other Dark-types like Absol, Darkrai, Honchkrow, Hydreigon and Bisharp, and other Ghost-types like Banette and Chandelure to your team.

If you had a Giratina Origin in your collection, you can also add it to your team as well.

Espeon has good moves in its arsenal as well. She has Psychic-type based attacks like Confusion, Psychic, Future Sight, Zen Headbutt and Psybeam.

In its Strategy Guide, Bleedingcool.com said that if you choose the best counters against Espeon's attacks, as well as powering up your Pokemon's attacks, you should be able to handle it by yourself.

Once Espeon is weakened, you may use Pinap Berries to catch it. Pinap Berries increases the amount of the Eevee Candies you can earn.

And there you go! You now have an Espeon in your Eeveelution collection.