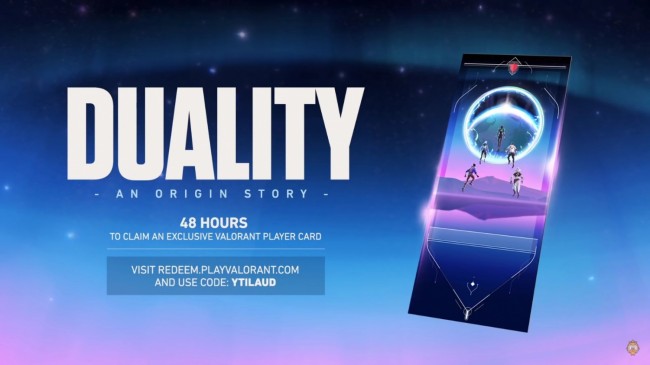 Players can redeem the "Duality" Player Card either via the Redeem page in the Valorant's website or "Store" tab within the game.
(Photo: Screenshot from MonkeyKingHero's "How to get the Duality Player Card -An Origin Story- in Valorant - Redeem.PlayValorant Down? NP!" video)

Players of the multiplayer online first person shooting (FPS) game Valorant will experience more of the game's lore with the launch of "Duality," a new cinematic short.

The said cinematic short was released during the Grand Finals of the Valorant Champinons Tour Master Stage 2 Masters in Reykjavik, Iceland. The said Grand Finals pitted ESports teams Sentinels and Fnatic against each other to determine who will top the FPS game.

Sentinel won said Grand Final, nabbing the trophy, and the win for the North American region.

You can now claim an exclusive Player Card for the "DUALITY" cinematic on the official VALORANT website!

Use code "YTILAUD" to redeem it, you have 48 hours! pic.twitter.com/P0LTEwGruq

DOT ESports tells the synopsis of the cinematic short in an article made for the its release. According to the article, the said short shows the character Killjoy trying to defuse a spike and eventually receiving help from the other agents, Viper and Phoenix.

READ MORE: League Of Legends Will Build Its Own Internet; Riot Games Unveils Plans To Build Direct Network For The World's Most Popular Game

Phoenix then encounters a clone of himself, who is escaping while Viper is firing towards the clone. Killjoy, on the other hand, successfully defuses the spike. Confused, Phoenix wanted to know why there is an alternate version of him. Viper then tells her fellow agent that it is finally time to fill him in what is going on.

On the other hand, the alternate Phoenix was seen arguing to an alternate Jett when an alternate Viper and the rest of the team approached them and preparing for something. The cinematic short ends with the scene of the two Earths mirroring each other.

With that, Valorant players wanted to know more about its lore with lots of questions needed to be answered.

But the cinematic short was only the beginning of what Valorant will give to its players for the release of "Duality." They will also receive a free Player Card that will be available in the next 48 hours. These Player Cards gave a cosmetic change as you can see them as a background image for your profile in your lobby.

The "Duality" Player Card will highlight the collision of two words as different versions of agents will fight to defend or steal the "Radianite."

In order to get your free "Duality" Player Card, you need to follow these steps, which was posted in an article made by Dualshockers.com.

According the guide, you must first go the Redeem page of the games' website. You must first log-in your Riot Account before proceeding to redeem the Player Card.

Once you are in the Redeem page, enter the code - "YTILAUD."

The code itself will be available for the next 48 hours, but during the release of said code, several Valorant players posted on Twitter that the Redeem page of the game was down due to the large influx of players redeeming the code.

There is another way to retrieve the code, as revealed in the guide made by Gamepur.com. According to the guide, in order to retrieve codes such as the one for the "Duality" Player Card, you must log in to the game, then you click the "Valorant" icon next to the "Store" tab. Choose "Prepaid Cards and Codes" where you will be prompted with a pop-up screen where you can enter the code.

Once you typed in the code, press "Submit." Your rewards will automatically load into your account once your submitted the code.